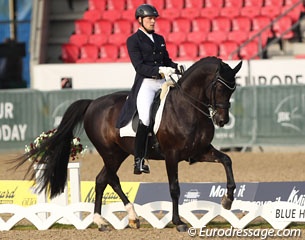 Finnish Grand Prix dressage team horse Jojo AZ has been sold to Denmark. The 10-year old dark bay Hungarian warmblood gelding has been acquired by the Danish Agnete Kirk Thinggard who is based at estate Julianelyst in Ostbirk, Denmark.

Under Finnish rider Henri Ruoste, Jojo AZ had a strong season in 2013. The combination competed at the CDI's in Compiegne, Kapellen, and Deauville and their results earned them a place on the Finnish team for the 2013 European Dressage Championships in Herning, Denmark. There they were the highest scoring Finnish pair qualifying for the Grand Prix Special.

The sale of Jojo AZ to Denmark was negotiated by German Joachim Arl.