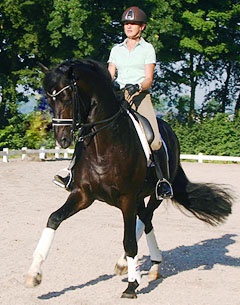 "Zinidi is a real eye catcher," Marlies told the Dutch equestrian magazine De Hoefslag. "When Engie got pregnant she put him in training with us. I thought he was so nice and gave me such a good feeling, that we decided to buy him. Zinidi has no stallion manners at all. He's very quiet and co-operative. He has jumper blood on the dam side and you can see that in his nice canter. He has much talent for the collected work, he picks up the pirouettes and piaffe really well. He's very athletic. I'm totally in love."

Marlies plans on competing him at small tour level next month. Her other 9-year old, Zigeuner, she will be competing at Grand Prix level in October. Her number one Grand Prix horse Miciano (by Medici) has been operated on for a chip in his right hind leg and is recovering well. He's now back in training.