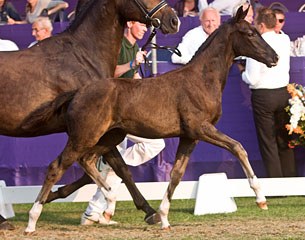 The second most expensive foal was Issey, a colt by Bordeaux x , which sold for 44,000 euro to Blue Hors Stud. The most expensive filly was Indira Viana (by Zack x Don Romantic) which achieved a knock down price of 37,000 euro selling to Indian customers.

Blue Hors Stud is a regular customer at Borculo and bought several foals, including two fillies, one of them is the full sister to the licensed Erlando (by Jazz).

An embryotransfer in-utero foal by Jazz out of Grand Prix mare Sisther de Jeu sold for 21,000 euro to Germany.

No less than 32 foals sold for more than 10,000 euro, which brought the average price to 12,000 euro. The colts were slightly more expensive
than the fillies. A total of 73 foals was auctioned as well as three
in-utero embryotransfer foals.