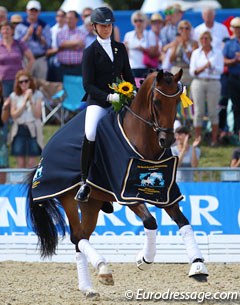 Laura Stigler and the Hanoverian gelding Doubleyou W aced the 6-year old preliminary test at the 2013 World Championships for Young Dressage Horses in Verden, Germany, on Friday morning 9 August 2013. Germany dominated the ranking of the class with no less than six of their horses in the top ten and three of them taking the so called podium places.

There was much more "restraint" in the scoring today as judging panellists Sandy Phillips, Isabelle Judet, Jacques van Daele and Linda Zang sorted out the ranking of the horses with a more realistic grasp on the points. Strong harmonious riding fortunately also had the upper hand over articifial flash and extravagance in the 6-year old division. While Stigler and Doubleyou W were today's winners with a9.28 total score, second placed Sa Coeur and third placed Damon's Delorange were on the pair's heels with their 9.14 and 9.12 score and anything is still possible in the Finals on Sunday.

Laura rode a very clean and meticulous test aboard German former pony team medal winning Lena Charlotte Walterscheidt's Doubleyou W (by Don Romantic x Rohdiamant). The trot was cadanced and the horse kept the smooth rhythm in the lateral movements as well. The medium trot was very controlled in tempo, but not ridden the entire diagonal, the extended trot was excellent. The halt for rein back wasn't square but the rein back itself went well. The walk tour was lovely. In canter the bright bay gelding makes very big strides but overall he could be more on the hindleg. The extensions were good and the changes successful. Stigler received a 9.4 for trot, 9.0 for walk, 9.8 for canter, 8.8 for submission and 9.4 for general impression to average 9.28. 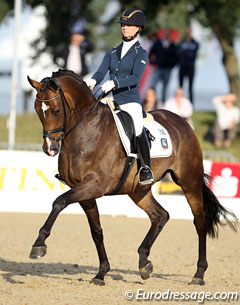 The runner up was last year's 5-year old World Champion, Sa Coeur, who sold over the 2012 PSI Auction for 2.3 million euro to Russian Elena Knyaginicheva.  As first to go on the day, Eva Möller and the Oldenburg gelding Sa Coeur (by Sir Donnerhall I x Don Davidoff) immediately set the bar very high with an excellent test. The collected trot had a good tempo, the medium trot was cleverly ridden but the lengthening in the extended was better. The horse should have crossed the hind legs more in the half passes and the shoulder in left was barely on three tracks. The medium and extended walk were exceptional. The horse was well balanced in canter, could open the frame more in the extensions, but executed safe changes. They got 9 for trot, 9.6 for walk, 8.8 for canter, 9.0 for submission and 9.3 for general impression to average 9.14. 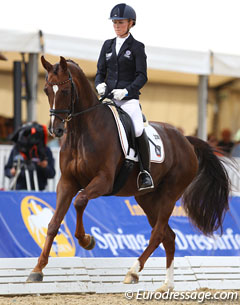 Helen Langehanenberg and Christian Becks' extremely talented Damon's Delorange (by Damon Hill x Rubin Royal) finished third with 9.12, but it won't be surprising if she climbs up to a shinier medal position on Sunday. The refined liver chestnut mare shook her head in the begin halt. The trot was super cadenced, active and quick from behind, with a good balance. Delorange briefly left the track in the shoulder in left. The mare does pull her right hock a bit higher than the left one but she is always engaged and stepping under. Helen was one of the few riders showing a clear difference between the medium and extended trot. The rein back was hesitant. The mare was tense in the medium walk and almost jogged, but the extended walk was huge. The canter was beautifully uphill with big flying changes, even though she got slightly tense before the change. The contact with the bit was at all times soft and consistent. They got 9.0 for trot, 8.0 for walk, 9.8 for canter, 9.3 for submission and 9.5 for general impression. 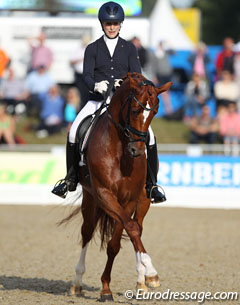 Beatrice Buchwald and the handsome Rhinelander stallion Lord Carnaby (by Lord Loxley x Rocket Star) ended in fourth place with 9.08 points. The chestnut stallion is an eye-catcher in the ring able to cover up his slow hind leg activity with fantastic freedom in the shoulder and graveful biomechanics. In the halt at entry he was narrow behind. The medium trot was nice and the half passes lovely but the horse in general had to be a bit more open in the throat latch. There was hardly any difference between the medium and extended walk but the overtrack was good. Buchwalk was clacking her tongue throughout the canter work and especially encouraging her horse verbally for the big flying changes. The horse did loses the clarity in the 3-beat rhythm in the extended canter right. The pair scored 9.3 for trot, 9.5 for walk, 9.3 for canter, 8.3 for submission and 9.0 for general impression. 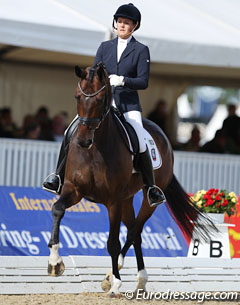 While Lord Carnaby can kill with his good looks, Carola Koppelmann's Sandiego is quite the opposite. The more old-fashioned bay Mecklenburger gelding (by Sancisco x Davignon) is not so much a stunner, but his rideability and solidity in the test today exceeded Lord Carnaby's. The trot work was nicely cadenced with a good rhythm and ground cover in the shoulders in. The horse could have been slightly more bent in the corners. The medium and extended trot were well ridden with much power from behind. The medium was very ncie, the extended walk superb. Both flying changes were high class but overall the horse could come up more in the withers in the canter work. They earned 8.8 for trot, 9.0 for walk, 8.9 for canter, 9.0 for submission and 9.2 for general impression to average 8.98. 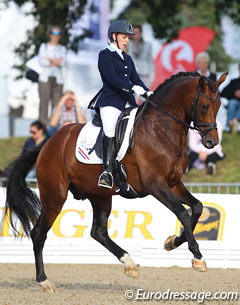 The best scoring Dutch rider on the 6-year old division was Mirelle van Kemenade-Witlox on the wonderful bay licensed KWPN stallion Cachet L (by Jazz x Ferro).His trot is wonderfully off the ground and expressive, but today the stallion could have been more in front of the rider's leg. The medium trot was slightly short-long in the front leg, the extended was more regular. There was good crossing of the legs in the half passes. The contact with the bit was a bit wonky in trot. Cachet L took big steps in the rein back but they weren't diagonal. The medium and extended walk were limited in ground cover and there was little difference between the two diagonals. The canter was big and powerful with a super hind leg but in the extended canter left the horse became crooked. The first change was good, the second crooked and short. Also the final transition from canter to trot was difficult. They got 9.2 for trot, 7.0 for walk, 9.8 for canter, 8.5 for submission and 8.8 for general impression. They totalled 8.68 points. 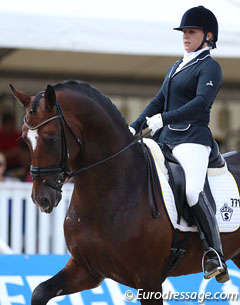 Swedish Sandra Sterntorp and her own and Elizabeth Ball's Westfalian stallion Rausing (by Rock Forever x Dimension) slotted in 7th with 8.46 points. The muscled and quite compact stallion with the pretty face was very solid in his test. The trot work was forward and energetic, but overall the bay should move the hind legs  much more towards the point of gravity. The medium and extended walk were huge in ground cover and scored the highest mark of the day (9.9). In canter, Rausing produced top flying changes and showed good potential for the future, but today Sterntorp seemed to have her hands full steering him through the test. It did look a bit laboured. The pair got 7.6 for trot, 9.9 for walk, 7.9 for canre, 8.4 for submission and 8.5 for general impression. 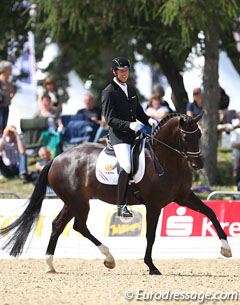 As one of the final combinations to go today, Dutch Olympian Patrick van der Meer and his Dutch warmblood mare Coco Chanel (by Sandreo x San Remo) were a nice surprise. By the way, it is also worth mention that it was great to see so many international Grand Prix riders present their youngsters in Verden this year (Langehanenberg, Telde, Minderhoud, Helgstrand, Faurie, Beresford, Jorissen, Michel, etc).  Van der Meer and his dark bay mare were like a cool breeze on a summer night. The beautiful, noble looking mare has an excellent trot: extremely lightfooted and ladylike. She has a fantastic front and a good hind leg, which really stood out in the half pass right. At times the collected trot was a bit too passagey. The half pass left could have had more cross over behind. The rein back was poor, with dragging feet. The medium walk was nice, the extended needed more overtrack. Coco Chanel became slightly tense in the back and not always had that supple swing over the top line. She could have opened more in the frame in the lengthenings. The first flying change was good, the second against the hand. Coco Chanel was not always honestly on the bit and Patrick was regularly half halting to keep her through. They got 8.8 for trot, 8.3 for walk and canter, 7.8 for submission and 8.1 for general impression. 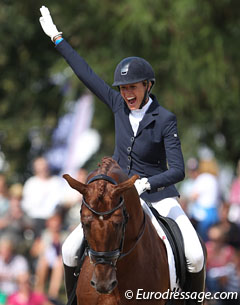 The most exciting pair to watch today and the talk in town was Danish born American Charlotte Jorst on the Dutch bred, Westfalian licensed stallion Vitalis (by Vivaldi x D-Day). The tall, skinny Jorst looked fantastic on the liver chestnut stallion and presented the horse in a quite open frame, but with the friendliest and sofest contact with the bit. While Europeans and especially sour Germans are firm in their belief that they will lose points if they show some teeth on a horse, Jorst proved otherwise and had the best colgate smile on her face throughout her ride. Last year Vitalis was trained and competed by Hans Peter Minderhoud and campaigned in Verden by his assistent trainer Marieke van der Putten. Jorst bought Vitalis last winter and has already gelled well with the sympathetic stallion. The stallion lost quite a lot of his bulk muscle, but now looks more lean, long legged and athletic. The trot was very elegant, light, and free in the shoulder with a consistent rhythm on the straight and curved lines as well as in the lateral movements. He was nice and bouncy off the ground and brilliant in the medium trot. He became a bit wide behind in the extended trot. Vitalis does not have that power hind leg, but he is always engaged and willing to work.  The rein back was obedient though the steps were small. There was a clear difference between the medium and extended walk, but the horse lacked in ground cover. The canter was rock solid, with uphill extensions and good first flying change. There was a bit of a hiccup in the second one. Overall it was one of the most pleasing, friendly test of the days and even though Vitalis was a bit open in the frame, it was much more appealing to look at than a spectacular mover fighting against the bit. The judges rightfully gave the horse a 9 for trot and a 7 for walk. They were a bit stingy with their 8 for canter, 8.7 for submission and 8.5 for general impression. Jorst and Vitalis averaged 8.24. 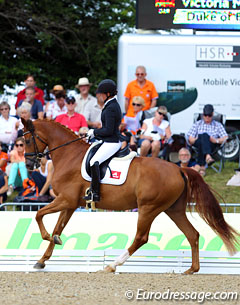 German U25 rider Victoria Michalke is riding for Great Britain aboard the British bred and registered Hanoverian Duke of Britain (by Dimaggio x Rubinstein). The chestnut gelding is quite limited in his trot with his shuffling hind leg, but Michalke rode nice half passes. The medium walk was great, the extended outstanding. In canter the horse has a nice uphill tendency but had to be more closed in the frame and collected on the hind legs. The first change was good, right before the second he became a bit croup high. The pair received 7.5 for trot, 8.4 for walk, 8.2 for canter, and 8.5 for submission and general impression. They averaged 8.22.

Text and photos by Astrid Appels - No Reproduction Allowed