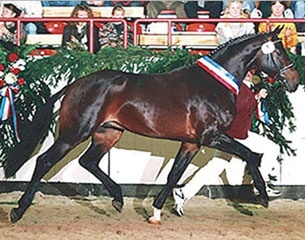 The dark bay stallion Akinos became the champion of the 1993 Holsteiner Stallion Licensing in Neumunster, Germany, and finished second in the 1994 Stallion Performance Test in Medingen. He scored a total of 134.75 points and got 135.37 points for rideability and 117.39 for show jumping.

Zuchterforum reported that Akinos stood up for stud as a state owned stallion in Ladelung from 1994 to 1996. He then moved to Denmark where he covered from 1997 to 2009 and since 2010 he was based at Heinz Bley's station in Crawinkel, Germany.

Akinos was a very versatile stallion siring offspring successful in dressage and show jumping. Over 65 offspring in Germany have placed at S-level, he has two licensed sons (Admiral x Agnal) and sired one state premium mare.