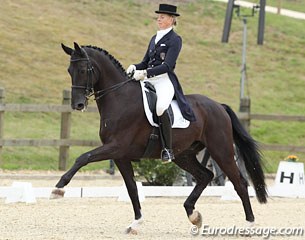 On Saturday 29 June Worcester suddenly became ill and was transported to the equine clinic in Hanover, Germany, where he was treated for a heart condition. Unfortunatey on Monday morning his condition worsened with an infection causing heart problems. He suffered from pulmonary oedema and could not be saved.

"Worcester was such a nice horse with a great character," Laus told Eurodressage. "He always gave everything to me and tried always to do everything right. His heart just stopped working. Everything wet so quick and I can not believe it."

Worchester was a 2000 born Oldenburg gelding bred by Claudia Brinkmann and owned by Laus' company Lehala GmbH.  He was by Weltblick out of Caprina (by Contango x Argentinus x Pil Trumpf). Laus started competing the dark bay gelding at small tour level in 2009 and made the transition to Grand Prix the same year in October.

She regularly campaigned Worchester, whose name was often spelled Worcester at shows, at German national level between 2010 and 2012 and did several international events such as the 2012 CDI Deauville, Compiegne and Leudelange. In 2013 she participated at the CDI's in Stadl Paura, Hagen, Hamburg and Compiegne.

Laus-Schneider was in the running for Italian Grand Prix team selection for the 2013 European Championships in Herning on 20 - 25 August 2013.