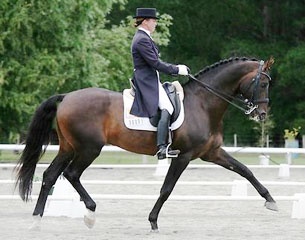 Jody Hartstone's Rhinelander licensed Grand Prix stallion Donnerwind was euthanized on Tuesday 25 June 2013 following a sudden bout of colic at his home in New Zealand. Donnerwind was 22 years old and was only retired from competition sport in 2011.

"When I woke up this morning here in Portugal I checked my phone and there was a text from my wonderful vet Noel Power to say that Donnerwind had suffered a torsion colic and had to be destroyed," Hartstone explained. "He had had a long life, but still I feel he left me too soon and I am pained that I never got to say goodbye."

Bred by Albert and Silvia Nijenhuis in The Netherlands, Donnerwind was by Donnerschlag out of St. Pr. St. Furinde (by Voltaire x Heidelberg).

Donnerwind became a licensed breeding stallion for the Rhinelander society in 1993 and did his Stallion Performance Test in Warendorf in 195 scoring a total index of 91.07 points (1(th place) with a dressage index of 93.91 points (11th).

Donnerwind's dressage career started in 1994 under Monika Dewes and Heiko Munzmeier. He then spent a period being training in Holland and returned under the saddle of Jana Freund in 1999. The duo competed at the 2000 and 2001 Zwolle International Stallion Show as well as the 2002 CDI-W Dusseldorf at small tour level. Donnerwind then briefly moved to the stables of Coby van Baalen.

Donnerwind sold partly to Jody Hartstone from New Zealand in 2006, where he became Reserve New Zealand Grand Prix champion. He then dropped back to Prix St Georges level and continued to compete for quite some time.

"I remember the day we met some six or seven years ago in Holland," Hartstone reminisced. "Donerwind was simply beautiful. I had been trying big heavy German horses and they were so hard to ride - I stepped aboard Donnerwind and he was so light and easy, sensitive and willing. He was a dream horse for a lady."