Taking Flight in Florida: Katharina Stumpf Gets the Best of Both Worlds 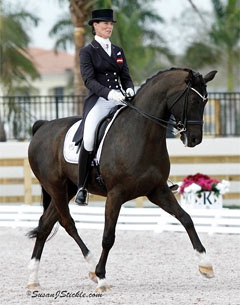 Taking flight to Florida for the winter and spring competition season, Austria's Katharina Stumpf is delighted with her success and feels that all three of her travelling buddies have performed beyond expectation. On Thursday 4 April 2013, Stumpf made her international Grand Prix debut with her number one horse For My Love at the 2013 CDI Wellington to finish third. She went on to win the Grand Prix Kur with 61.875%.

Stumpf shipped three horses to the sunshine state: her 12-year old Hanoverian gelding For My Love (by For Feeling), which she took from M-level to Grand Prix, her small tour horse Nymphenburg’s Love, an 8 year-old Oldenburger gelding by Carry Gold, and her 5-year old Hanoverian mare  Donna Felice (by Don Frederico), which finished fourth at the 2012 Bundeschampionate.

Kathy feels that the wins are terrific but the true satisfaction is in the training progress. "For sure, the highlight this season was my success with For My Love," she said. "Because we worked on improving his piaffe and passage so much, we were able to get such good marks in the Grand Prix. So to get so many ribbons this year and to hear so many compliments about his appearance makes the season really fun for us, both for him and I. Particularly as he is a very proud little black entertainer and enjoys it so much to get out at the show."

Also extremely happy with Nymphenburg’s Love, Kathy feels the horse is gaining more and more confidence, enabling her to show him successfully at an international level. "Even in such a big arena like it is here at the Global Dressage Festival or at Jim Brandon," she added.

In love with Florida because of the perfect weather and the possibility to have perfect conditions for her horses, Kathy enjoys that you can go out for a walk with them all around Wellington for an hour before you start your training and have all the body warmed-up and the horse enjoying life before it comes down to work. "You wouldn’t do this in Austria now with the temperatures there. Plus, the facilities in Florida are perfect so you can concentrate on your training knowing they have the best conditions for the health of the horses’ feet." With a show organised every weekend and sometimes also during the week, Kathy has the advantage of being able to change the horses and then check the results of the alternations in training. "Also, it gets the horses more used to the feeling of showing so you can really improve the level of quality of both you and your horses. You get the opportunity to compare to a lot of good international riders and are granted the opinions of a lot of judges up to Olympic level."

Aside from the perfect riding conditions, Kathy loves that Florida offers a lot of other sport as well that she can enjoy on her days off. "We like to go golfing almost four days a week. Then there is also the chance to go to the show jumping and of course every Sunday, the polo. The social life though and the possibilities of Palm Beach and Southern Florida are also great and you wouldn’t believe how fast the 4 months of the season can go by."

Born in Vienna, Austria, Kathy loves her European home very much and feels that the journey gives her the best of both worlds. "In the winter, before we move to Florida, we spend some weeks in the mountains but to ride and train in winter in Vienna is not so easy. The biggest difference between the two nations is, for sure, the weather but also in these four months you can meet and compare yourself to many big international riders and judges. Plus, you don’t have to travel and so it is easier on the horses."

Based in Wellington at the Palm Beach Equestrian Centre, Kathy is right above the street of the Global Dressage Festival and not more than 15 minutes away from the other big dressage arenas such as White Fences, the Palm Beach Derby show grounds and the Jim Brandon equestrian centre.  With many trainers flying in to Florida to coach students, Stumpf can take her pick who she wants to learn from that week. So far she has worked this season with Juan Matute from Spain, Anja Plönzke and Christoph Niemann from Germany. 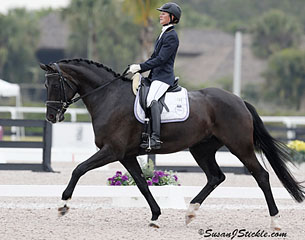 Set to return to Europe on 17 April 2013, right after the Nations Cup, Kathy will settle back into her stable in Vienna and is ready to take on the best of what both continents have to offer in terms of training. "The biggest difference for us is that the Americans train very hard on the basics and on the correct way to ride the tests. It’s a very theoretical way to get to the goal but it looks like it is a very horse-friendly way. The European training concentrates more of the improving the quality and the gaits of the horse. I think you can take the best from both systems and improve yourself."

Believing that Florida has a very good competitive system, Kathy feels the lower levels are really easy and friendly, giving the horses and the riders both the success and the fun to motivate them in the future. "This is how they bring them in a very positive way up to a higher level."

Supported by her talented riding sister, Kathy acknowledged her as the biggest help and the best trainer she could possibly have. "My sister, Gabriela Stumpf, is also showing in Florida with her 7 year-old Oldenburg gelding Finally Love (by Farwell III) at Third Level and was awarded some 1st places and placings with scores up to 72%. When the two of us get back to Europe we have some shows in Austria, a few in Germany and then we return to Austria for the indoor season."