Best of Gold, Champion of the 2013 Oldenburg Spring Stallion Licensing 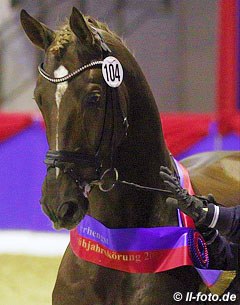 At the spring licensing, the stallions are not only presented in hand but also under saddle.

The liver chestnut champion Best of Gold is bred by Silvia Gering from Ostercappeln, Germany, and owned by Heinz Ahlers.

The reserve champion is the bay Viva Vechta (by Vivaldi x Ferro x Lancer II), bred by P.J. Crum from The Netherlands and owned by Antonius Schulze-Averdiek. This colt will be auctioned on Saturday 6 April.