Dover and Van der Schaft in the Running for U.S. Chef d'Equipe Position 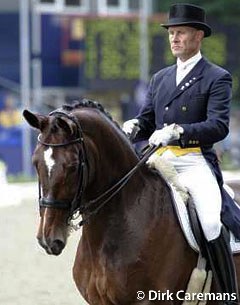 The United States Equestrian Federation (USEF) will continue the process of filling the role of Technical Advisor/Chef d’Equipe for the U.S. Dressage Team with two applicants, Robert Dover and Rien van der Schaft.

These applicants have completed the interview process with the six member Search Committee. The next step in the process will be for the applicants to be interviewed by the High Performance Eligible Athletes Dressage Committee and the members of the 2012 U.S. Olympic Dressage Team.

The High Performance Dressage Committee will then provide their decision to the Executive Committee.

At the end of 2012 Anne Gribbons resigned as U.S. Technical Advisor, a job she took up in December 2009. At the time, the now 56-year old Robert Dover also applied for that position, but was rejected by USEF. He then moved on to become Canada's team trainer.

The 59-year old Rien van der Schaft runs his own dressage stable, Stal Sprengenhorst, in The Netherlands. He competed 9 horses up to Grand Prix level. Rien was member of the Dutch dressage team from 1979 till 1983 and competed at the 1980 Alternate Olympics in Goodwood.