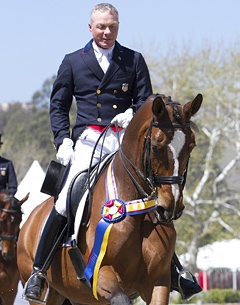 After the media frenzy which surrounded U.S. Dressage Team member Jan Ebeling at last summer's Olympic Games, he and his mount Rafalca enjoyed a quiet winter away from the spotlight.  The well-deserved vacation obviously benefited both rider and horse as they put in strong winning performances at the CDI 3* held 27 - 30 March 2013 at the Rancho Mission Viejo Riding Park in San Juan Capistrano, CA.

The 15-year-old Oldenburg mare (by Argentinius x Rubinstein) owned by Amy Ebeling and Ann Romney showed no signs of being rusty in returning to the international arena for the first time since London.  First to canter down centerline in Thursday's CDI Grand Prix class, Ebeling and Rafalca looked fresh and were rewarded by the judging panel of Stephen Clarke (5* GBR), Mary Seefried (5* AUS), Linda Zang (5* USA), Cara Whitham (5* CAN), and Sarah Geikie (4* USA) with a score of 70.979%.  Despite strong challenges by Kathleen Raine aboard long-time partner Breanna, a 13-year-old Hanoverian mare by Brentano II x Weltmeyer, and Guenter Seidel with the 13-year old Westfalian Coral Reef Wylea (by Weinberg x Saluut), Ebeling's score remained atop the scoreboard for the duration of the class as Raine and Seidel had to settle for second and third with 70.340% and 69.787%, respectively.  Ebeling and Rafalca also danced through their technically-challenging Grand Prix freestyle to win on a score of 73.600%, while David Blake rode Melanie Pai's Danish Warmblood gelding Ikaros (by Akinos x Fernando) to win the CDI Grand Prix Special with 67.854%.

"Rafalca showed me that she was mentally and physically ready to be back from vacation," said Ebeling.  "I was thrilled with the consistency and accuracy in the Grand Prix.  She seems to have more sparkle than ever before!"

In the small tour, Heather Kennedy presented Alanna Seller's 12-year-old Rhinelander mare Escada Magica (by Ehrentusch x Rouletto) to earn a score of 66.272% and the blue ribbon in the CDI Prix St. Georges class.  The Intermediaire I victory went to Megan O'Brien riding the 12-year old Hanoverian gelding Wyoming (by Weltmeyer x Akzent I), owned by Carol Robertson, on 64.693%.

In the Young Rider classes, Cassidy Gallman won both the Team and Individual tests with the Hanoverian gelding Woden (by Weltmeyer x Ankum) with a scores of 59.035% and 59.974%, respectively, while CDI Junior competitor Rison Naness rode Kristina Harrison's Hanoverian mare Venezia (by White Star x Espri) to sweep her division with 64.459% in the Team Test and 61.474% for the Individual Test.

The CDI San Juan Capistrano was also an official qualifying competition for the U.S. Young Talent Search Finals, a new program designed to identify and reward talented young horses on the West Coast which also will pay out over $10,000 in prize money and awards and conclude with a spectacular Finals in June.  In the four-year-old division, Karen Ball and the Oldenburg stallion Sir Spiderman (by Sir Donnerhall x Rubinstein I) rode to their second straight Talent Search victory with a winning score of 70.208% for owners Alan and Theresa Reese.  Ball also rode the Reese's gray Holsteiner gelding Calimero (by Contender) to top the five-year-old field with a score of 72.328%, while Jocelyn Hamann's lengthy trip from Reno, NV was made worthwhile with a win on her own Dutch warmblood gelding Casanova (by Lauwersmeer Laka) in the six-year-old division  with 72.286%.