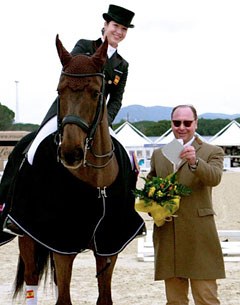 Long-time Spanish team rider Alexandra Barbançon Mestra made a winning international Young Riders debut at the 2013 CDI Vidauban held at Bernadette Brune's Domaine Equestre des Grand Pins on 1 - 3 March 2013. While Barbancon already got her feet wet at Young Riders' level at a few local show in The Netherlands in 2012, the Spanish rider successfully tested her mettle in the CDI ring last weekend.

The 2013 Spring Tour in Vidauban is a two-week competition event, usually set in glorious weather, but the days leading up to the first week of competition brought snow this year to the South of France. Fortunately the skies cleared and temperatures rose right at the start of the show and the riders were able to compete in decent weather.

"I knew Webbe was going well, but I never expected to win my first international Young Riders show," Alexandra told Eurodressage. "The first day he was quite hot and to be honest the arena was so muddy from the previous rainy days, but Saumur prepared us well for these kind of conditions," she joked. "He was a bit tense, but for the rest he was good."

Barbançon explained that as weather and footing conditions improved her horse got into the swing of things and they raked in more points. Besides making her start at a new, more difficult dressage level, Alexandra also premiered a brand new freestyle in Vidauban. Arranged by Dutch kur specialist Charles Monterie, her new freestyle is based on the music of the highly celebrated movie 'Les Intouchables'. "The second day went really well, but unfortuneatly I had three big mistakes," she admitted. "I thought I would have low points, but the judges told me that the rest was so nice it compensated. Then came the day of the kur. I had just received my kur a couple of days before, so I had never practiced it," she confessed. "Before riding it Anky told me "just enjoy, it's the first time, we will see how it goes," but Webbe was really flying."

Despite a few spooks in the freestyle the Spanish duo kept things under control and posted the top score on the board to win a second trophy. Receiving positive feedback from the judges as well as high notes, Alexandra was moved by her result. Training the Jazz offspring has proven to be a challenge, but those who perservere will conquer.

"I had some tears in my eyes, because I really couldn't believe it! Webbe isn't the easiest at all and I struggled with him at the beginning, but it's so nice to see that hard work pays off," she explained. "So that was really the cherry on top of the cake."

Barbançon has not yet made any further show plans for the rest of the season, but she is heading for the 2013 European Young Riders Championships held in Compiegne, France, in July.