Roeser to Be Re-Elected Chair of DOKR Dressage Selection Committee 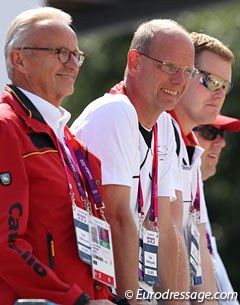 At the annual members meeting in Warendorf, Germany, on Tuesday 26 February 2013, Klaus Roeser was chosen to be re-elected as chair of the dressage selection committee of the German Olympic Equestrian Committee (DOKR).

Germany's senior Grand Prix dressage riders gathered at this annual meeting to discuss the plans for the show season and to ask questions about the upcoming competitions.

The Muhlen based Klaus Roeser, chair of the DOKR Dressage Selection Committee, was re-elected for another four-year term.  The A- and B-team riders agreed in favour of presenting the 49-year old Roeser, who is director of Paul Schockemohle Marketing, for re-election at the DOKR General Assembly in Munster in May 2013.