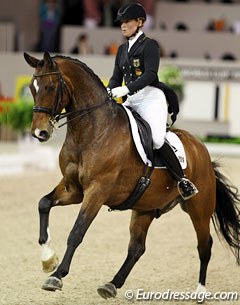 Isabell Werth's Rhinelander gelding El Santo NRW tested positive to the prohibited medication cimetidine at the 2012 Rhinelander Regional Championships in Langenfeld on 21 - 24 June 2012. The case is currently under legal review with the German Equestrian Federation but Werth could be banned from competition for at least one year.

In the seven month period between June 2012 and February 2013 several legal hearings and a visit to Werth's farm in Rheinberg were conducted by the German Equestrian Federation, during which Werth and her lawyers had to explain the case. Werth could become a repeat offender, having already been banned from competition after a positive doping test for Fluphenazine at the 2009 CDI Wiesbaden.

In an interview with ST. GEORG, Werth stated "my conscious is clear, El Santo has never needed a substance against stomach ulcers." The German FN has given her the opportunity to prove how the substance came into El Santo's body. If she is unable to produce clear evidence, Werth risks another ban from competition for at least one  year.

The positive medication case for cimetidine is a complex situation as El Santo tested positive at a national show. For Germany's most successful dressage rider a lot is at stake. Already in 2009 she was banned from competition for 6 months after testing positive to Fluphenazine. With this new case she can be considered a repeat offender, even though this new case does not involve doping but "prohibited medication".

This case proves to be quite complex. The Rhinelander Championships in Langenfeld are a national show and the substance cimetidine is not prohibited by the FEI. The FEI considers it an allowed substance for administration, but certain rules must be upheld. The medication can be submitted to the horse before a show, but not at the competition. Moreover, the administration of this medication has to be documented, according to the FEI.

In Germany one similar case has presented itself based on a positive test to cimetidine. In the spring of 2012 a rider was banned from competition for five months by the Disciplinary Committee of the German FN, as her horse tested positive to cimetidine at the national show in Riesenbeck in 2011.

Isabell Werth is confident she can prove that El Santo was contaminated by Warum Nicht, who is El Santo's neighbour and stands in the box next to him at home. The injured Warum Nicht has been on bute for a longer period of time due to his fractured pelvis and in order not to harm his stomach the horse also received the prohibited medication cimetidine. Isabell also added that if El Santo were to need any stomach medication, she would have given him Gastrogard, which is an allowed substance.

Isabell believes that a power failure in her barn might be the cause of contaminated water flowing from the automatic waterer from Warum Nicht's stall into the waterer in El Santo's box. Warum Nicht received cimetidine through a seringue in his mouth. Her groom emptied the serignque and washed it in his waterer. A power-out in her barn caused the water pump to stop which enabled negative pressure to draw the water from Warum Nicht's waterer and pump it into El Santo's. The German equestrian federation has hired two experts, a technicician and a pharmacologist to investigate if this is a possible scenario.

In Langenfeld Werth was notified before her start that she would have to do the doping test. "If I feared that the test was to be positive, I would have loaded my horses on the truck and gone home," she told St. Georg

"Because this case still  an ongoing investigation, the German Equestrian Federation will not make any statements until after the disciplinary committee has reached a decision," said FN press officier Susanne Hennig.