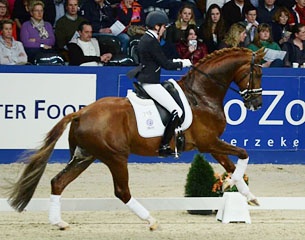 The licensed stallions Desperado, Charmeur and Bordeaux became the grand winners of the 2012-2013 KWPN Stallion Competition circuit of which the finals were held at the 2013 KWPN Stallion Licensing in 's Hertogenbosch, The Netherlands, on Friday afternoon and evening 1 February 2013.

"We enjoyed both (top ranked) stallions and are happy they are licensed," said judge Arie Hamoen. Dreamboy got a 9 for his lightfooted trot but Despardo scored a 9.5 for his clear, rhythmical walk. "Especially the suppleness of this stallion stood out," said Hamoen. 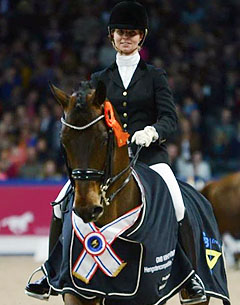 At M-level Emmelie Scholtens and the chestnut Charmeur (by Florencio x Jazz) were untouchable. The trot was praised for its clear rhythm and uphill tendency. "Every step was right," said Hamoen. "What else do you want to see. He gets a 10 from us." The canter earned him a 9 and the walk was good for a 7.5 as the stallion was a bit tense. Mirelle van Kemenade and the bay Cachet L (by Jazz x Ferro) finishe second after receiving a 9.5 for canter. Spanish Severo Jurado Lopez and Chippendale (by Lord Leatherdale x Negro) were third. The horse has a very expressive trot and canter but fails to impress in walk.

German Eva Möller and Paul Schockemohle's KWPN licensing champion Bordeaux (by United x Gribaldi) dominated the Z-level class. The bay excelled with his lightfooted, engaged trot for which he earned a 9. He also scored 9 for his canter, general impression and conformation. "We enjoyed his test," Hamoen commented. Kirsten Beckers and Bristol (by Jazz x Goodtimes) were the runners-up, followed by Lisanne der Nederlanden and the chestnut Breezer (by Johnson x Sultan).