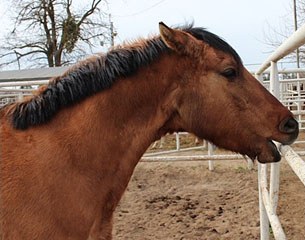 Movements characterised by repetitive, invariant, and apparently functionless, stereotypic behaviours that are heterogenous in their causes  can drive horse owners a little crazy. Historically known in the equine world as 'stable vices," weaving, wind-sucking, crib-biting or box-walking, are all largely irreversible behaviors that are a result of domestication.

While some argue that the behaviour stems from boredom and that the private life of stabled horses is irrelevant as long as it does not affect performance, others take the action as a sign of greater importance.

"Many have begun to question whether these habits should be seen as a sign that we are pushing the horse beyond its limits of adaptation,"  Dr Paul McGreevy, Professor of Faculty of Veterinary Science at the University of Sydney, told Eurodressage.

Not recognised in free living or feral horses these stereotypies are popularly regarded as being transmissible by mimicry, while others are associated with health and performance problems. "While these behaviours do tend to lower the value of affected animals at auction, there is still much debate about the significance of these behaviours in captive domestic horses," McGreevy continued.

Some say it is a method for the horse to cope with stress, but Dr McGreevy says the results of studies into this link have been inconclusive. Nevertheless, crib-biters are known to have a higher mean heart rate and stereotypies could be a symptom of the horse attempting to cope with suboptimal environments.

"Endorphins have been implicated as a possible source of reinforcement for crib-biting, because opioid antagonists can reduce crib-biting by 84%, suggesting that from the horse's view the benefits of crib-biting are mediated by opioid receptors at some point."

However, the resting behaviour of the crib-biters was also significantly increased, meaning that it was more likely the opioid was having a generalised sedative effect.

Although there are many suggested causes, the exact cause has not yet been verified, but studies do show a pattern in the horse's genes. "Studies have consolidated the view that certain family groups are more likely than others to demonstrate stereotypic behavior," McGreevy acknowledged.

The environment also plays a major part, particularly in dressage horses. "The importance of management factors that might frustrate the horse include the amount and type of forage, the bedding type, the number of horses in the yard, and the amount of communication between neighbouring horses."

In addition the amount of time spent in the stable directly corresponds to the likelihood of such behaviors. So can a horse pick up one of these stereotypies from his neighbour?

"Some authors believe that exposure to a stereotypy may increase the likelihood of it developing, but the evidence that horses learn by observation is rather limited,' McGreevy explained. "However, we should not rule out the possibility that having a neighbour that expresses stereotypies may increase the arousal of observing horses and therefore predispose them to developing it themselves."

Veterinarian Dr Tom Schell says that both cribbing and weaving are behavioral issues, mostly related to prolonged confinement in a box stall. He believes the habits develop out of boredom.  "In many instances, the behaviors can be reduced by good turnout and socialization," Schell stated. Also supporting the belief in the mimicry of such behaviors, Dr Schell advises that one horse can definitely learn the behaviour from another. "In many instances, the behaviors are transferable, much the same as smoking in people," said Schell.

Suggesting that these practices are the result of an endorphin rush, Dr Schell has learnt from experience that cribbing or weaving horses achieve a pleasurable or satisfying feeling to a certain extent.  "Again this is supported by the fact that if these horses are pre-occupied, as with good turnout and grass, then the habits are less in terms of occurrence."

In terms of treatment, behavioral and environmental modification is best, but Dr Schell adds that there have been surgical procedures performed in the past, but with little success. "There are also cribbing halters to help modify the behavior, but really you have to understand why the horse is doing it, and usually it is boredom," he stated.

There has also been some noted improvement in both conditions with some herbs such as Ashwaghanda as well as amino acid L-theanine, which improves neurotransmitter levels in the brain and can create a relaxing effect for the horses.

However, overall Dr Paul McGreevy advises that nutrition and social environment are the most important causes of such disorders! While evidence for genetic predisposition is promising it is not yet compelling and copying is the least likely of all explanations.