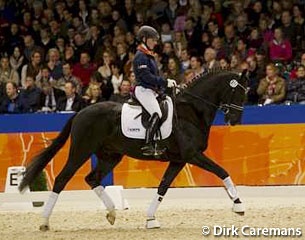 The 4-year old Dutch warmblood licensed stallion Dark Pleasure (by Ufo x Jazz x Ferro) has moved to the stables of Gerdine Maree as his steady rider, the German Jana Freund is pregnant.

Freund and Dark Pleasure have been competing in the 2012-2013 KWPN Stallion Competition but the German rider will not be able to ride out the full show circuit due to her pregnancy. Married to Matthias Vos, the Weeze based Jana is a professional dressage rider with the record of most Bundeschampion's titles to her name (because she also rides ponies).

Bred and owned by Wouter Plaizier, Dark Pleasure scored a total of 78 points in the 2011 KWPN Autumn Stallion Performance Test. Freund has been training and competing the black stallion and showed him at the 2012 Pavo Cup Semi Finals in which they finished 17th.

Dark Pleasure arrived in Maree's stable a week ago and the combination will make its show debut on Wednesday in Roosendaal at the next leg of the KWPN Stallion Competition.