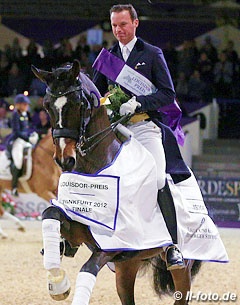 The 30-year old Thomas Wagner and his 10-year old Dutch warmblood gelding Very Keen (by Oklund x Dutchboy) were the winners of the 2012 Louisdor Cup Finals for Upcoming Grand Prix Horses held at the 2012 CDN Frankfurt on Sunday 16 December 2012.

The Bad Homburg based professional rider scored 71.860% to claim victory and pip Ingrid Klimke on the 10-year old Hanoverian Liostro (by Le Primeur x Wenzel I).

"It is the best Christmas present," said the beaming winner. In the warm up test Very Keen was distracted. "There were many children in the hall and a few visitors told them to be quiet. But exactly that was the problem, because Very Keen didn't like the "pscht" at all," Wagner explained. In the final on Sunday the KWPN gelding was highly motivated and concentrated. In 2011 Wagner did not compete Very Keen but focused on training him up the levels. The pair started competing in the Young Horse Grand Prix classes in 2012.

Now the national coaches motivated the professional to change his horse show plan for the upcoming year. "I will do my planning during the Christmas days," Wagner stated.

Ingrid Klimk, who finished third the day before with Dresden Man in the 2012 Nürnberger Burgpokal Finals for young Prix St Georges horses,  finished second with Liostro in the 2012 Louisdor Cup Finals.

Nadine Capellmann and Dorothee Schneider were two more internationally successful riders competing in Frankfurt. Both reached the final of the Meggle Champions Tour. Aboard the Baden Wurttemberger bred Girasol (by Gribaldi x Landioso)  Capellmann won the Grand Prix freestyle  with 76,00%. Schneider placed second with her horse Forward Looking on 75.95%. "I am very happy," Capellmann said, "of course there were several small mistakes, but I am happy how she has grown and there is definitely more potential there." Capellmann criticized her ride: "It was okay. I am very excited that I can always count on my horse."

Frankfurt show organizers Klaus-Martin Rath and Paul Schockemöhle, which saw their competition lose its World Cup status as well as be a CDI event entirely, were very glad about the positive feedback from the crowds.

"We weren't sure how the visitors would react to the changes. For example the shopping area upstairs, the purple decoration and different directions," Klaus-Martin Rath admitted.  Overall the changes were accepted positively. Rath and Schockemöhle were very satisfied about the visitor numbers: "Overall there were around 43,000 visitors," Paul Schockemöhle mentioned.

Looking forward to 2013, Schockemohle stated that, "you always have to take everything into account and change details, otherwise you're not a good organizer."