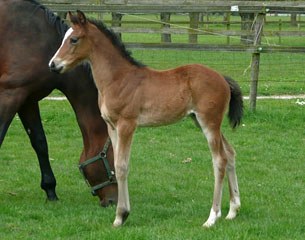 Sixty-five 2.5 year old young dressage colts appeared on the second dressage day of the pre-selection for the 2013 KWPN Stallion Licensing and the licensing committee picked 26 colts which can move on to the second phase of the licensing in February 2013.

Vivaldi (by Krack C x Jazz) was the top producer with 17 sons entered for the pre-selection. The licensing committee accepted 8 for the next round. While the Vivaldi get stands out with his model and beautiful front, the stallion also fails to pass on a strong hind leg.

Wim Ernes, president of the licensing committee, said that he looked in particular for a strong hindleg for that offspring. "We saw several very interesting stallions today," Ernes explained. "We accepted a large amount of Vivaldi offspring for the second round because we want to keep something to select. The Vivaldi sons stood out with their size, conformation, expression and front. We clearly selected on power in the hind leg."

One of the stand-out colts at today's pre-selection was Flintstone B (by Vivaldix  Ferro). Ferdinand (by Vivaldi x Havidoff) stood out with his uphill trot.

Other stallions which left a positive impression were Forty (by UB40 x Contango), which moved with much technique, expression and power, and Fennovanck PP (by Uphill x Munchhausen), which had good gaits and an expressive, large-framed model. Fine and Smart (by Sorento x Jazz) excelled with his ease in movement.