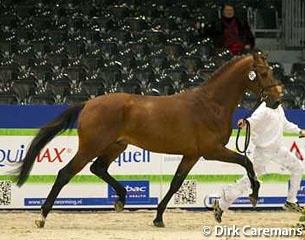 The 3-year old died this morning during a training session. He and his rider were out on the canter track for a gallop, when the rider fell and the horse crashed fatally against a tree.

He was approved by the KWPN society at the Licensing in Den Bosch last February, where he also sold via the KWPN Select Sale for 70,000 euro to VDL Stud and the Swedish Gransbo Stuteri. The bay colt never did his KWPN Stallion Performance Testing, but was licensed for the NRPS society.

The talented bay stallion was in training with Emmelie Scholtens.