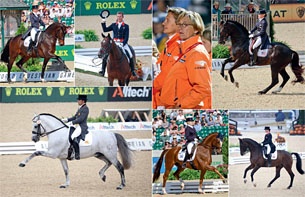 The test events will run according to the following schedule:

“Test events in six FEI disciplines will be organised and even though no specific test events will be held in Vaulting and Para Equestrian, all technical aspects will be examined to ensure the competitions in all the disciplines meet the same level of excellence.”

The Games’ Organising Committee has now confirmed that the Dressage and Cross Country phases of Eventing will take place at Haras du Pin and the final Jumping phase will be held at the main stadium – Stade Ornano – in Caen.

“Haras du Pin is renowned for the quality of its infrastructure and the FEI is very pleased that a plan that meets all our requirements regarding the best possible conditions to ensure horse welfare has been agreed to,” Ingmar De Vos added.

Looking ahead to the 2018 World Equestrian Games, Rabat (MAR) has withdrawn from the bidding process.

“The sad passing of HRH Princess Lalla Amina has meant that the Moroccans have lost the driving force behind their bid to stage the FEI World Equestrian Games in 2018,” said Ingmar De Vos. “We have two strong bids from Canada and Austria for 2018, and we are hopeful that the Moroccans can regroup and put in a bid for 2022.”

Bromont (CAN) and Vienna (AUT) are still in the running to host the 2018 World Equestrian Games. The host city will be selected by the FEI Bureau in the spring of 2013.