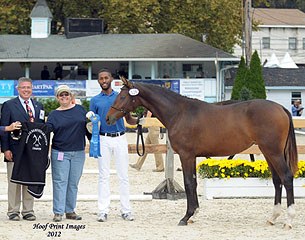 Dressage at Devon attendees were treated to an amazing array of individual breed classes in the world’s largest open Breed Show on Thursday 27 September 2012.  From Andulusians to Gypsy Vanners, and Hanovarians to Knabstruppers, each breed had the opportunity to show off its unique qualities.

In the Hanovarian – Age 2 and under, Francheska AH (by Fielding out of SPS Malena), bred and owned by Kate Palmquist, took home the blue. In the 3 year old and older KWPN-NA class, Toraya (by Goodtimes out of Lora), bred by J. Boorsma and owned by Iron Spring Farm, Inc., won first place.

As the evening drew near, the performance division kicked into gear. It started with the USEF Fourth Level Test of Choice in which two former Dressage at Devon volunteers competed.