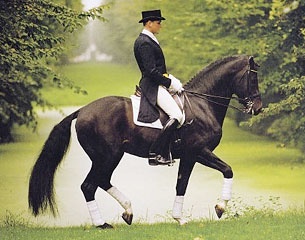 The Holsteiner licensed stallion Lorentin I has passed away. The 20-year old stallion was already suffering from old age and it was decided to have the horse euthanized yesterday.

Bred by Jan Herbert Detjens, Lorentin I was by Loutano out of Wiena (by Latino x Farnese). He was licensed in Neumunster in 1994 and stood up for stud at station Haselou in Lürschau, Germany.

Trained by Wolfgang Schade, Lorentin was schooled all the way up to Grand Prix level and competed at CDI's in Neumunster, Hamburg, Oslo, Hickstead, and Rotterdam. As a youngster he competed at the Bundeschampionate. In 2006 Lorentin was retired from competition due to a meniscus injury.

Lorentin had nine licensed offspring, including the 1999 Holsteiner Licensing champion Lusello and Lindberg, Limoncelli I and II, Lento,
Laurentin, Lavari, Lanzett and Loreto.  At the time the newly licensed Lindberg sold at auction to Sweden for 140,000 euro. Lorentin has three full brothers which competed in dressage and show jumping in Denmark.