Vitalis Sold to the United States 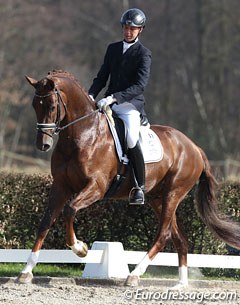 Vitalis (by Vivaldi x D-Day) is bred by Toon de Crom and W. Verbakel and was originally named Capriool. The horse first came into the spotlight when owners Willeke Bos and Eugene Reesink presented him at the 2009 Westfalian stallion Licensing in Munster, Germany. The striking chestnut was awarded the reserve champion's title and was leased to the Warendorf state stud where he stood at stud for two years and became one of the top producing stallions in the region.

In 2011 Vitalis was put in training with Hans Peter Minderhoud to prepare for a Dutch warmblood licensing, but the stallion got rejected by the KWPN stallion committee. Under Minderhoud's stable rider Marieke van der Putten the horse competed at the 2012 World Young Horse Championships in Verden, where he finished sixth in the consolation finals. He also ranked fifth in the 2012 Pavo Cup Finals.

Vitalis has now been sold to Jorst, who is based in Reno, NV, U.S.A.. She trains with Steffen Peters.

This year Jorst has been competing at Grand Prix level with Asterios (by Akinos x May Sherif) and on small tour level with Tristan (by Burggraaf x Kaiserstern) at international shows on the West coast such as the CDI Rancho Murieto, CDI San Juan Capistrano and CDI-W Burbank.