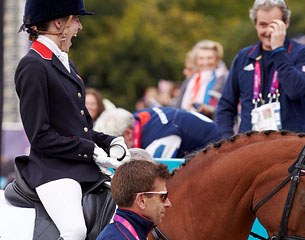 On this second day of competition, the remaining three Grades - IV, III and Ia – took centre stage for their first London 2012 Paralympic outing to perform in the Team test. All five Grades have now completed the team test and the all-time record holders Great Britain have taken a strong and early lead.

A cold but spirited start to the day in Grade IV

It was a beautiful but cold day in Greenwich Park with big blue skies to greet the spectators for a 9am start and another winning British performance this time by Sophie Wells, a Paralmypic debutant, but nonetheless current World and European champion. Riding Pinocchio, the 22-year-old posted an international personal best score of 75.906%, giving Great Britain a second top mark towards their overall team score. Belgium’s Michele George came in second place amongst the fourteen riders competing in Grade IV, including former Paralympic Champion Philippa Johnson from South Africa and two of her team mates – Ciska Vermeulen and Ulricke Dekeyzer. Frank Hosmar, Individual silver and bronze medallist from the World Equestrian Games™ in Kentucky also delivered the goods, with a score of 71.781 towards the Dutch team score.

Breaking the spell in Grade III

Germany’s Hannelore Brenner broke the British domination in each of the Grades with a wonderful performance on Women of the World earning her the third best score of the day. It is this very same partnership that currently holds European, World and Paralympic titles – so definitely firm medal contenders in the individual tests. The British are never far from the top spot, and it was Deborah Criddle, reining European Freestyle champion that slotted neatly into second place on a very respectable score of 72.926. Third place in the Grade III team test went to Denmark’s Annika Dalskov, silver medallist at the World Equestrian Games™ in Kentucky in 2010 and at the 2008 Paralympic Games, riding Aros A Fenris.

Just when you thought the day couldn’t get any better, Sophie Christiansen (GBR) third from last to go in the Grade Ia Team test, delivered the most amazing performance riding Janeiro 6 finishing on a score of 83.765 – the top score of the Games so far. Singapore’s Laurentia Tan did not disappoint for her first London 2012 experience, taking second place riding Ruben James 2 much to the delight of her family and friends standing by. She was the first Asian to win an equestrian medal at the Paralympic Games in 2008 and is looking like a strong contender here – competing with Singapore’s first Para-Equestrian team at a Paralympic Games. Third place in the Grade Ia Team test went to Helen Kearney on Mister Cool, giving the debutant Irish team some valuable points.

Where they stand after the Team test

Overall, the British riders took the top spot in all the Grades for the Team test events with the exception of Grade III where Hannelore Brenner broke the spell to take pole position ahead of British team member Deborah Criddle. Given their remarkable performance at all levels, they are set on a course for gold and there is little that could stop them now, only the next two days will tell how they fare. Runner up position and third place however are hotly disputed with Germany, Denmark, The Netherlands, USA, Ireland, Belgium and France battling for the coveted Paralympic medals so there will be a lot of pressure on the riders this weekend as they set out on their first individual performances whilst trying to secure points for their teams. It’s been a remarkable couple of days for Ireland so far, on their first team equestrian experience at a Paralympic Games looking very determined with their top three riders claiming 3rd, 4th and 7th places.

What to expect tomorrow

The first medals… Grades II and Ib take centre stage again after a day of rest for the Individual Championship Tests where they will be competing not only for individual medals in their respective Grades but also securing the final points (from their Grades) towards the team scores. Start lists can be found here

Facts & Figures
At 60 years of age Eleonore Elstone (CAN) in Grade IV was the oldest competitor in today’s team test events.

Rihards Snikus made history today, as the first Latvian to ever compete in the equestrian events of the Paralympic Games, he took part in the Grade Ia Team test event

Laurentia Tan was the first Singaporean and Asian athlete to win a Paralympic medal in 2008 with two individual bronze medals in Grade Ia.

Sophie Christiansen (GBR) riding Janeiro 6 in Grade Ia was awarded the highest score of the of the Games so far with 83.764

Quote
Kjell  Myhre (NOR) President of the Ground Jury “The sport has really taken a big step forward at these Games. The quality of the riding, the horses and also the diversity of the teams and their sporting professionalism reflects just how far the sport has come. There have been lots of sporting highlights over the past two days and the crowds have been amazing, very supportive and sensitive to the riders needs – waving instead of clapping - and knowledgeable of the sport.”