Eventing: Tight at the Top for Olympic Team and Individual Eventing Medals 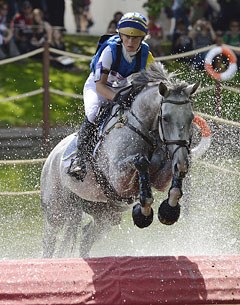 Olympic Eventing cross-country produced spectacular sport in Greenwich Park today where at the end of an afternoon filled with thrills, spills, dramas and excitement, team Germany maintained the advantage. But it’s only a slight one, as the host British side lies just over five penalty points behind in silver medal position going into tomorrow’s final jumping phase, while Sweden is just over a single point further in arrears.

And first-day dressage joint-leaders – Ingrid Klimke (GER) and Sara Algotsson Ostholt (SWE) – returned to the top of the individual leaderboard when Japan’s Yoshiaki Oiwa was one of 10 fallers on the track over which 15 of the 70 starters were eliminated. Should Klimke and Algotsson Ostholt hold firm tomorrow, the German may live to regret her speedy and seamless tour of the track with Butts Abraxxas, as it her Swedish rival who crossed the finlsh-line closest to the optimum time with her mare, Wega, meaning the Swede would finish ahead.

The pendulum swung wildly throughout the day, with Britain and Germany playing cat-and-mouse for pole position, while the Swedes rose to third when the Australians lost their grip on overnight runner-up spot. The Aussies were severely hampered by elimination for both Sam Griffiths (Happy Times) who fell on the flat between fences, and anchorman Clayton Fredericks who hit the turf when Bendigo lost his landing gear after the big drop at fence 20. When  Lucinda Fredericks and Flying Finish had a run-out at the narrow upbank exit from the second water complex, the Australians completed in sixth place and start tomorrow 17 points behind team USA in fifth.

Joint-fourth with the Swedes after Dressage, the New Zealand side held their ground when adding just over five penalty points to their tally. Andrew Nicholson (Nereo) produced one of nine rounds within the optimum time, which rocketed him from 21st to ninth placing going into the final day. And it is really tight at the top of the individual leaderboard – the joint-leaders just 0.2 ahead of the masterful Kiwi Mark Todd who nursed the inexperienced Campino home with just 0.40 time penalties to maintain the hold on bronze medal position he established at the end of yesterday’s dressage phase.

Michael Jung’s clean sheet with Sam was pivotal to German dominance today, and this partnership lies individually fourth ahead of Great Britain’s Tina Cook (Miners Frolic) and Mary King (Imperial Cavalier), who hold fifth and sixth places respectively, while Sweden’s Ludvig Svennerstal really put himself on the map when adding just 0.4 for time to slot into seventh with Shamwari, just ahead of Germany’s Sandra Auffarth (Opgun Louvo) in eighth.

If it was a pressure-filled day for all the riders, it was almost unbearably so for the British who had to contend with the wild enthusiasm of the vast majority of the 50,000 spectators who poured into the Olympic equestrian venue from early this morning. They couldn’t contain themselves as their super-stars appeared, and there was an unbelievable wall of sound from thousands of supporters as each of them travelled round the course. Pathfinder Nicola Wilson, got them off to the perfect start with a fault-free run from Opposition Buzz that broke the beam in 9.52 minutes, demonstrating that the clear produced by Australia’s first-line rider Chris Burton (HP Leilani), second to take on the 29-fence track, was very possible indeed.

But Mary King’s Imperial Cavalier is a strong horse at the best of times, and the noise from the behind the ropes just spurred him on over the early part of the track. He was running so freely that her compulsory stop after the second water complex, due to fence damage incurred when Japan’s Takayuki Yumira and Latina tipped up at the Cricket Ball Basket (fence 23), may well have been opportune. “I was very nervous of the crowd”, King said after resuming her ride to complete with just 1.2 time penalties, “but it was wonderful to have such support behind us.”

If the crowds had been noisy during King’s round, it paled into insignificance compared to the reception given to Zara Phillips and High Kingdom. Others might have buckled under the strain, but the former World and European champion, whose supporters club included her mother, the Princess Royal (Princess Anne), and cousins Princes William and Harry along with the Duchess of Cambridge, Kate Middleton, just cracked on to defy her occasional critics and produce the ride of her life – a clear round at the Olympic Games which would count towards the team score at the end of the day despite the loss of a front shoe. 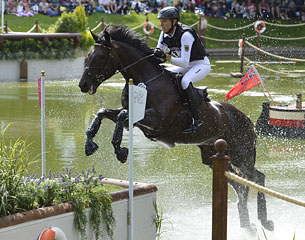 But it was the double-clears from Klimke and Jung that sealed the lead for the Germans. Peter Thomsen (Barny) added 5.2 time penalties to his scoreline, Dirk Schrade (King Artus) picked up 10.8 of the same, but Sandra Auffarth collected just 4.8 with Opgun Louvo to leave the Germans on a tally of 124.70.

Niklas Lindback helped clinched that third spot for Sweden but was lucky to get away with bad stride at the last where Mr Pooh was managed to stay on his feet after hitting it hard. The slippery ground played a significant role today, penalising two riders who fell on the flat and slowing others down.

The award for the most sensational dismount of the day might well have gone to Holland’s Elaine Pen who, going sixth from last, was unseated at the middle element of second water and hung on for her life with the crowd roaring her encouragement before gravity won out. Bitterly disappointed to drop into the shallow water, she turned to her mare Vira to give her an apologetic pat and a hug.

As the dust settled tonight, Sweden’s Sara Algotsson Ostholt said she was “very happy” to be in joint-first place individually and that “we have a good team and if we have a good day tomorrow then we have a real chance”. But as Mark Todd pointed out “it’s very, very close and, as we’ve known since long before these Games, there are so many good horses and riders, it will be very close tomorrow”.

Course designer, Sue Benson, said “it was a marvellous day, with lovely pictures of our sport being beamed all around the world, and the horses finished extremely well due to some wonderful riding”.

The fate of the Eventing medals at the London 2012 Olympic Games are still very much hanging in the balance. It’s still all to play for tomorrow....

Quotes:
The Royal Park at Greenwich lived up to its name, attracting a hugely enthusiastic crowd that included British royal family members, the Princess Royal (Princess Anne), Duchess of Cornwall, Duke and Duchess of Cambridge, Prince Harry, Princess Eugenie and Princess Beatrice, along with former FEI President HRH Dona Pilar de Borbon and current FEI President, HRH Princess Haya.
Lord Coe, chairman of the London Organising Committee of the Olympic and Paralympic Games (LOCOG), was also on hand to watch the thrilling action at Greenwich Park.
Course designer Sue Benson: “cross-country day is always difficult. Whatever you think, some of the things you expect don’t happen and unexpected things do.”
Lucinda Fredericks (AUS) - “I’m very disappointed about that (run-out at the second water) because the rest of the ride was fabulous. I just didn’t get those ears lined up between those two flags! But my horse is still young and I guarantee we will win a medal for our country one day”.
Andrew Hoy (AUS) - “This was the toughest course, terrain-wise, I have every ridden at an Olympic Games.”
Zara Phillips - “the crowd were unbelievable, and it was fun! The ground was very slippery and that made it hard work.”
Sandra Auffarth (GER) - “During the last minute (on the course) I felt him (Opgun Louvo) getting tired and I reduced the speed. I had to avoid any mishaps for the team. That was the biggest difficulty of this course, you could only guess how tiring it would be on the horses.”
Michael Jung (GER) - “I am very happy. The course was very difficult. It was really tricky but the horse is small with plenty of thoroughbred speed and he jumped very well. We are in good form”.
Michael Jung (GER) - “Tonight I am out for dinner with my family to get some new power for tomorrow!”
Sam Griffiths (AUS) - “My horse slipped on the flat and lost his back end. Then the next thing I knew I was on the floor. I’m absolutely gutted, but that is sport. The going was quite hard so I did not want to put big studs in. That’s maybe why he slipped.”
Ingrid Klimke (GER) - “I knew the course was really challenging and I am so thrilled with my very wonderful horse. He made it easy for me. Four years ago in Hong Kong he did the same, and I am very privileged to have him.”

Related Links
Eventing: The Quiet Man from Japan Steals Eventing Dressage Limelight
Eurodressage On the Scene at the 2012 Olympic Games