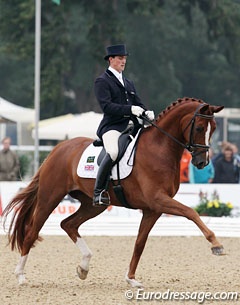 Four of the best British horses will head to the prestigious 2012 World Dressage Championships for Young Horses in Verden, Germany (1-5 August). The event, now in its thirteenth year, showcases the best five and six year old dressage horses in the world, with around 50 horses in each age category.

Last year, Woodlander Farouche ridden by Michael Eilberg was the champion five-year-old, and will this year return to contest the six-year-old classes. The British bred chestnut mare is by Furst Heinrich out of Woodlander Dornroeschen and was bred by Lynne Crowden at Woodlander Stud. Farouche is jointly owned by Lynne and Michael’s father Ferdi.

Farouche has won numerous young horse titles, most recently the British International Young Horse Championship at Hickstead just last week with a huge score of 99.60%. Lynne Crowden told BD ‘I thought our second trip to Verden would be easier, but this year is just as stressful as last time! I think the competition may be stronger. In the 6-year-old class, training comes into it much more, which means the other horses could make up some ground despite Farouche’s extraordinary natural ability. After the great result at Hickstead, we have got our fingers crossed for Verden, it is amazing just to get there.’

The other British bred horse selected for Verden is Hawtins Floriana, who will also contest the six-year-old classes. The 16.2hh bay mare is by Florestan out of a Weltmeyer State Premium Hanoverian mare. She was bred by Hawtins Stud in Gloucestershire by breeder and owner Judith Davis. Hawtins Floriana, ridden by Bryony Goodwin, was winner of the Elementary class at Addington Regionals in February this year, and went on to finish third at the Winter Championships. She also qualified for the final of the British International Young Horse at Hickstead this year.

Becky Moody’s Carinsio will contest the five-year-old classes. The Dutch gelding is by Painted Black out of a Beaujolais mare. Carinsio triumphed at Hickstead last weekend in the five-year-old British International Young Horse Competition. He was also the four-year-old Shearwater National Champion in 2011 and winner of the Potential International Dressage Horse Championships at the Nationals in the same year.

The other five-year-old set to take part is another Dutch bred gelding. Cashmir is by Serano Gold out of a Michaelangelo mare. He recently won the Shearwater International Young Dressage Horse class with Anders Dahl at Hartpury last month, and also was the highest scoring five-year-old at the Pavo Cup qualifier. Cashmir is owned by Fiona Bigwood.