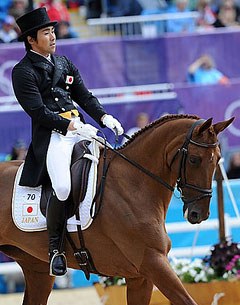 Japan’s Yoshiaki Oiwa and Noonday de Conde produced a sensational test to take the individual lead in the closing stages of Eventing dressage at the London 2012 Olympic Games in Greenwich Park (GBR) today.

The quiet-spoken 36-year-old admitted afterwards that he could hardly believe it. “I’m a bit shocked”, he said at the post-competition press conference. “Nobody expected it – as you can see there are not many Japanese media here!”. On an extraordinary day, it was Italy’s Stefano Brecciaroli who slotted into second place while New Zealand’s Mark Todd moved into third. Both Oiwa and Todd’s results proved pivotal for their teams, with Japan rising to fill sixth place in the team rankings behind the Kiwis, who go into tomorrow’s cross-country phase in joint-fourth along with Sweden.

As it stands tonight, the host nation lies third behind Australia in second while the defending champions from Germany are already out in front. But with just three penalty points separating the first two, and the British less than five points adrift, stalked by the Swedes and Kiwis just 1.2 points further behind, there is very little in it. As German Chef d’Equipe and Coach, Hans Melzer, said this evening, “the four top riders are just one point away from each other and the teams are so close. They might as well start tomorrow on a zero score. Psychologically today’s result is good and our team did a super job and I’m happy for that, but tomorrow is another day.”

The second day of Dressage was a thrill a minute from the outset. There was intense excitement ahead of the arrival of Team GB’s Zara Phillips and High Kingdom, third into the arena this morning, and they didn’t disappoint, making a dramatic entrance that was full of pizazz and earning a score of 46.10 despite a serious mix-up over the first flying-change in canter. With Robbie Williams’ “She’s the One” playing in the background, the 31-year-old Briton kept calm and carried on to finish with a flourish and to rapturous applause.

She was immediately upstaged however by the pure accuracy of Sweden’s Sara Algotsson Ostholt and Wega who nailed all the changes to perfection as they powered through their test to join first-day leaders Ingrid Klimke and Butts Abraxxas in temporary pole position on a score of 39.30. “We started very tense in trot and I thought – how is this going to turn out? But after the walk, which was good, she relaxed a bit and the canter was very nice”, Algotsson Ostholt explained afterwards. Wega was bred by the rider’s mother, and it’s quite a family affair for the Algotssons at London 2012 as Sara’s sister, Linda, was first in for the Swedish team yesterday riding Wega’s dam, La Fair. Algotsson Ostholt said she knew her short-limbed but big-bodied mare was ready for the Olympics when finishing second at the German Championships recently, where the pair picked up a dressage mark of 34.

New Zealand’s Caroline Powell was “disappointed” with her performance with Lenamore who belied his 19 years of age when nearly galloping out of the main arena after posting a score of 52.2. The crowd had exploded with excitement after the previous score was announced, and Lenamore lit up when he heard the roars. “He’d been doing so well outside”, Powell said afterwards. But the popular Kiwi duo also got a huge reception at the end of their test which included some lovely extended trot work. “You can feel the affection people have for him (Lenamore) – he has a big fan-base”, said the Scottish-based rider whose mother died just a few weeks ago after a long battle with cancer. In perhaps an appropriate coincidence, the hymn, Abide with Me, which was sung so exquisitely by Scotland’s Emeli Sande during the Olympic Opening Ceremony last Friday night, played discreetly in the background throughout Powell’s test.

The Australians continued to build on their position with a mark of 40.00 from Lucinda Fredericks and Flying Finish, while Tina Cook’s rain-drenched but happy ride with Miners Frolic, rewarded with 42.00, did British chances no harm. But then suddenly the Swedes sprang into contention when Niklas Lindback and Mister Pooh posted 45.20 following a short break while a thunderstorm rolled across the park. When New Zealand’s Andrew Nicholson, the man much-fancied to take individual eventing gold at these Games, posted precisely the same score with Nereo there was some surprise. His 12-year-old gelding didn’t settle to his job, and Nicholson blamed the halt in proceedings. “There were two serious riders about to go in - I had seven minutes to go and he (Nereo) was starting to find his best work when they decided to stop”, Nicholson said. He didn’t mind the thunder and lightning, but during the 10-minute hold I had to just walk him around and he thought he was in a training session. He got really quiet and confused, he switched off.”

There was nothing switched off about Italy’s Stefano Brecciaroli and Apollo van de Wendi Kurt Hoeve, who burst into the lead with a fabulous test that put 38.50 on the board. “I am so happy, but most of all for my beautiful horse!” he said. “I made one mistake and I am sorry for him that I did that. He is good at dressage”, the rider pointed out in somewhat of an understatement. “He got 35.00 at the World Equestrian Games in Kentucky where we were second after dressage, but the cross-country will be difficult”, he added wisely. Another great score – 40.40 – from Clayton Fredericks and Bendigo further cemented the Australian position, but the Germans couldn’t be surpassed when Sandra Auffarth’s mark of 40.00 was added to the 39.30 and 39.80 registered yesterday by Ingrid Klimke and Dirk Schrade respectively. The final German partnership of Michael Jung and Sam found their 40.60 surplus to requirements in the team calculation, but good enough for 11th place individually at this early stage.

But no-one could have anticipated the spectacular performance from Japan’s Yoshiaki Oiwa and Noonday de Conde. This fabulous 11-year-old French-bred mare was beautifully ridden by her 36-year-old rider who has been training with Dirk Schrade in Germany for the past three years. The softness of Oiwa’s hand and leg-aids, and the quietness of his riding style, produced a test filled with poise, elegance, balance and a little bit of magic to earn a mark of 38.10 which took the individual lead and rocketed Japan up into fifth place in the teams. Asked afterwards what Schrade had said about his pupil’s fantastic performance, Oiwa answered “he said there were a few things I could have done better – it wasn’t good enough he told me!”

As last man in, Mark Todd, entered the arena his country was lying eighth. The top team placings were already decided in this first phase, with Germany in the lead ahead of Australia in second and Great Britain in third –  William Fox-Pitt’s 44.10 with Lionheart failing to improve the British scoreline.

Following his retirement in 2000, Todd was awarded the title “Rider of the Century” by the FEI, but admitted on returning to the sport in order to compete at the 2008 Olympic Games in Beijing that the level of dressage had gone beyond anything he had previously experienced, and that he was struggling with that. Today, however. this remarkable man, now aged 56, blew away the last of the cobwebs with a breathtaking performance that oozed comfort, ease, experience and pure enjoyment to put 39.10 on the scoreboard and put New Zealand right back into the frame in equal-fourth place with Sweden.

As the dressage phase concluded today there was an almost dream-like quality to the way it unfolded, but it was Todd who said 12 months ago, after the Olympic Test Event, that what riders will need to be successful over the cross-country course at Greenwich Park this summer would be “a sharp little pony”. And Ireland has one of those.

As the questions turned to tomorrow’s cross-country test, Todd said this evening that “the fences are not particularly difficult. Hardest to read is the narrow bank coming out of the water (fence 18b, the Inland Waterways), but with the hills, the twists and the turns, and riders going really fast, problems can happen anywhere, including the corner at the end of the course (fence 24ab, The Rose Garden).

Camilla Speirs may be lying equal 27th, but her score of 47.60 is less than 10 points off the leader and the part-Connemara Portersize Just a Jiff, which she rode in pony competitions until he grew too big as a six-year-old, is barely 155cms high. He goes like a cruise missile and his 22-year-old rider is fully focused on her job.

Speirs said today “you’ll really have to ride the course with your head. My horse is usually good at coming back to me and he holds his line and just gets on with it.” Like all the rest, she and her “sharp little pony” will be giving it their best shot over one of the most talked-about cross-country courses of all time which is likely to prove pivotal to the London 2012 Eventing medals.

Quotes:
Linda Algotsson (SWE) talking about her mare, La Fair - “She’s very much a woman. You can’t tell her anything, you have to ask her nicely and be gentle with her, then she will do anything for you!”
Linda Algotsson (SWE) - “My mother has one amazing mare that has produced two of the horses on this Swedish team and she has more like them at home!”
Clayton Fredericks (AUS) - “He (Bendigo) did stumble at the end of the canter work, which probably stopped us from getting under the 40% barrier but there is still a lot to play for in this competition.”
Philip Dutton (USA) on his performance with Mystery Whisper - “I am pleased without being ecstatic, as you can always do better. In dressage it is so difficult to balance going for flamboyancy and producing the softness the judges are looking for.”
Michael Jung (GER) - “I had a good feeling. Sam was calm and I could really work with him. We had two little mistakes. I would have expected more but I am happy with the team result. We will see tomorrow where we stand.”
Michael Jung (GER) talking about the performance of his pupil, Japan’s Kenki Sato riding Chippieh, who is in overnight 15th - “That was a super job. His horse is in great form and Kenki did well today. I hope he can keep this result.”
Nicolas Touzaint (FRA) when asked why he chose the 17-year-old Hildago de L’Ile rather than a younger horse for London 2012 - “For the Olympics, experience counts.”
Nicolas Touzaint (FRA) on his expectations, after winning team gold in Athens 2004 - “A medal first - what colour it is we’ll have to wait and see!”
Caroline Powell (NZL) - “the biggest challenge on the cross-country course will be the cambers and the undulations. It might make the horses back off the fences a bit.”