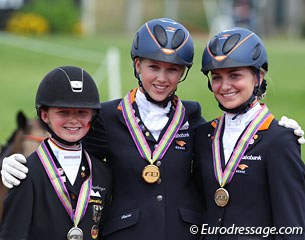 Dutch Sanne Vos went for gold in the individual test at the 2012 European Pony Championships in Fontainebleau, France, on Saturday afternoon 21 July 2012. Aboard the 9-year old Champ of Class Vos scored a winning mark of 78.707% to claim the highest step on the podium. German 12-year old Semmieke Rothenberger earned silver, while the bronze went to 16-year old Dutch rider Rosalie Bos.

The level of riding, especially by the top ranked combinations, was outstanding and it made the individual test an exciting class to watch. Particularly the German and Dutch combinations were in a neck-to-neck race for glory, while Danish Victoria Vallentin held the strongest cards amongst her team mates to have a shot at an individual medal. Sixteen out of 52 combinations scored above 70% and 30 of them got 66% or higher. 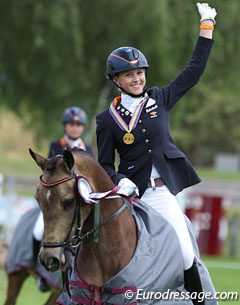 In her final year on ponies Sanne Vos was on the ball today and surfaced at the top of the board after a very strong ride. Unlike in the team test Lisanne Zoutendijk's Champ of Class was sharp, on the aids, and bouncing off the ground in trot. The pony was very forward, maybe even a bit too much as the shoulders-in were ridden in medium trot instead of collected trot. The halt at entry was not square. The self-carriage in trot was oustanding today and the rider was much more in charge of the tempo and frame in the trot extensions, even though the last extension on the center line became a bit hasty despite its massive ground cover. The buckskin gelding was very secure in the canter work but the pony was overall strong in the hand and not always through the neck and honestly on the bit.

The individual test was judged byby Saleh (FRA), Christensen (DEN), Holler (GER), Stukelj (SLO) and Sanders-Van Gansewinkel (NED) and they awarded Vos a personal best score of 78.707%. Judges Saleh and Sanders placed the pair first, the other three second. Vos' low score was 76.951% from Danish judge Christensen, and her high score was a staggering 82.073 % from Dutch judge Sanders; a difference of 5.122% !! Especially Sanders' high scoring became an eye mote because on the boards with the individual break down per movement the audience could see how the Dutch judge was consistently scoring Vos one point higher compared to her colleagues in every single movement as well as the collectives as soon as the canter had started. 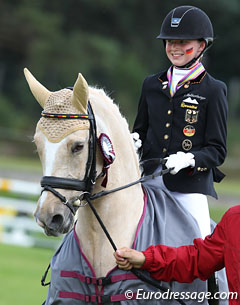 It would be wrong to say that Sanne Vos' test was unworthy a top score or inferior to the test of silver medal winning Semmieke Rothenberger. Two totally different pictures were painted and one could say it could be a matter of taste (and wonder at the same in which direction do judges want dressage to go?!). What do you prefer to see: a ride with harmony, lightness and elegance or one with power, expression and pezzazz at the cost of an ideal contact?

Rothenberger's ride on the German Riding Pony mare Golden Girl (by Don't Worry x Dancer) was flawless. The pony was up in the bridle, soft in the contact, moving from behind over the back with balance and swing. The trot extensions were well regulated and the balance was good on the voltes. The rein back was crooked though and in the collected walk the mare could be a bit more together. The walk pirouette was nice. Also on the canter serpentine Golden Girl could have been slightly more collected, but overall the simple changes were very well ridden. The change between V and R could have had clearer walk steps. 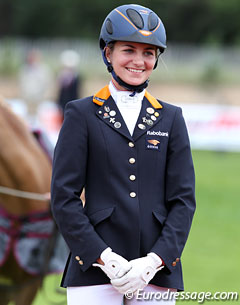 Dutch Rosalie Bos, who was the provisional leader of the individual test on Friday, was able to carry her strong score of 75.561% through to Saturday which put her on the podium for bronze. The 16-year old Bos had an outstanding ride on her very young 6-year old Paso Double (by Bodo x Inselfurst) with highlights in the extensions and some tiny beauty mistakes in walk and the shoulder in. Four judges were in unison keeping their scores between 74.1% and 75.8%, but the Dutch judge once again was more optimistic and her at 77.683 %.

While Sanders-van Gansewinkel's "up-scoring" was not blatant (the difference was not 5% as sometimes happened in the past with other judges), her input was influential enough to safekeep a podium spot for both Dutch girls. If one were to scratch Vos and Rothenberger's high score, for instance, effacing Sanders' stamp on Vos' marks, the difference between the two riders would have been only 0.150% with Rothenberger first and Vos second. It's factual to say that both riders differed by a hair's breadth. It also needs to be said that Sanders did not downscore the German combinations, as was the old-fashioned nationalistic judging strategy in the past (not to upscore one's own country, but downscore the rival ones).

The rider coming closest to bronze was Danish Victoria Vallentin on the tall 13-year old palomino mare Natalina (pedigree unknown). The halt at entry was not square but the trot work had much relaxation and regularity. In walk the pony was blocked in one step of the walk pirouette which instantly made her drop from a third to a sixth place on the running score board. The canter tour was lovely with great self-carriage and balance and lovely simple changes, but overall the mare should have her nose more out as she is held slightly behind the vertical.

While the judging of the top riders produced mumbling and grumbling amongst the crowds, the podium kids were on cloud nine. Vos was of course ecstatic and wiped away tears when she saw her marks on the score board. At the press conference she explained that Champ of Class "felt really good. I went into the arena and he was as good as never before: sharp, very fresh. Of course I took the risk that something could go wrong in the test but it fortunately didn't happen. I never expected this. It was a dream."

The 12-year old Rothenberger, who is already well versed in English as well as a native speaker of Dutch and German, explained that Golden Girl "already went really well in the warm up. She didn't pull on the reins and it went really well. I was very happy with my points and am happy with silver."  The Bad Homburg based rider stated that she didn't expect to win a medal. "Last year I was eighth at the Europeans and I didn't expect this when we got here. I'm happy that I can ride the freestyle and will just do my best. We'll see how it goes."

The demure Bos confessed that today was an absolute thriller for her. "It was so nerve-wrecking to see how the rest  of the riders were doing. the entire day was thrilling." With her talented pony Rosalie knew that she had a chance for a medal. "I was sixth in the team test and knew I could do it, so I totally went for it," she said. "I was very happy with my score. He already felt really good in the warm up and I could really ride him in the test."

The judge at C, German Peter Holler, commented that the individual test was "an interesting class with very good performances. The first two riders were very close. There were reasons for both of them to win. Vos' was energetic, had impulsion and a super canter tour. Semmieke had a very good test, very consistent and in a very nice contact. She always kept the overview. They were very close and at the end it was a very good placing. Bos has a young pony and it's remarkable that she did such a good test. She to ride even better to compensate that."

Holler was pleased with the increased level in riding in the second test of the week. "The top riders were much better and the average ones were also better. The riders are more relaxed and more used to the atmosphere. Look at the French pony (Tim) who was very spooky but on the second day did a good job."

Dutch judge Mariette Sanders-van Gansewinkel agreed with Holler on the top performances.  "It was a great day. I thought they all three went really well. Vos was excellent, especially in canter. Semmieke had a very nice trot, was very consistent and very sympathic. Bos had a really good trot tour and Vallentin was also very good, but it was a pity of her two small mistakes." When Eurodressage questioned her on the score differences she had created, the amiable Dutch judge replied that "in the ranking I was very closely together. You give points. All three ladies were better in the individual test. You have to look at the ranking of the riders."