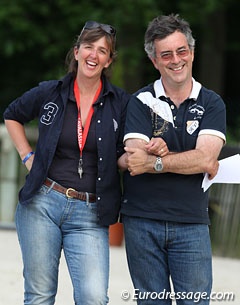 Global Dressage Analytics has been following the progression of all the Olympic teams and individuals over the last year. With some of the teams we have been working in close collaboration to give them detailed statistical breakdowns for their team selections and figure by figure trend analysis to include in training plans.

Now that the final selections are known we thought it would be interesting to publish some of our predictions. Actually we have predictions for every couple, but we won’t be publishing that now, we have sent a copy of that under lock and key to Eurodressage to compare with the actual results when they come out to see how close the predictions are. But we can present the Team predictions and some quantitative data on the top individuals.

What data do we use? We have all the CDI results for many years, but in this analysis we have just included the results since the European Championships last year in Rotterdam. We build a number of different “analytics: based on best scores, average of the top best scores, most recent scores, figure by figure analysis and simulation of best and most likely tests etc. We then combine them statistically taking into account their relative precisions and we come up with a GDA Prediction for each couple. We have then varied many of the parameters of the combination to see how stable the results are, and the predictions we quote here are actually very stable for different ways of calculating them.

Of course as the automobile advertisements say “ your mileage may vary”. On the day any number of things can go wrong, and sometimes they do. But on the whole a couple does not make an enormous step up in score. So these predictions take into account the usual variability of each couple, but not the one-of errors that can sometimes have a big effect in any competition.

The Team event this year is particularly different from previous Olympics, for one thing its the combination of six tests that counts (3 Grand prix and 3 Specials); also the declared team of 3 riders cannot be changed once the event is underway, if a couple is eliminated or for some reason all 3 riders cannot start in the Special, then the Team will be out of the ranking. So even the top teams can have a serious problem and drop out of the ranking. As we saw in Lexington such disasters can happen to anyone, only this year the impact is even more important.

Predicting the top two teams is not so hard, every dressage fan on the planet has been following the spectacular performances of British riders in the last year, and the rising young stars from Germany. In January at the GDA release in Palm Beach we predicted GBR/GER/NED for the medals. Then over the last months the gap between GBR and GER has been narrowing with the super performances of Kristina Sprehe and Helen Langenhanenberg. A month ago the (unpublished) GDA prediction put Germany ahead of Britain by a small margin, but then the withdrawal of Mathias-Alexander Rath and Totilas tipped the balance back in favor of GBR! 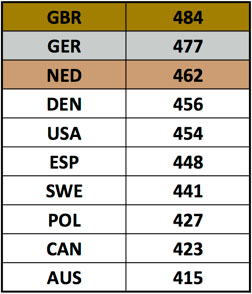 GDA Predicted Team Scores. The Team score is the sum of the Grand Prix and Olympic Grand Prix Special % final scores for the currently declared teams. We estimate the precision of each total to be about ± 5 points, so this means there is about a 2/3 chance that for example the GBR Team scores is between 479 and 489.

The table shows our final predictions now the riders are all entering the last days of preparations. There is a precision of about 5 points on each of these team predictions, that also means that there is about a 25% chance of Germany overtaking Britain on the day and taking Gold, and about a 30% chance that either Denmark or the USA go ahead of the Netherlands to take the Bronze medal.

Of course, numbers only tell us so much, their are two “dark-horses” that can really influence the final results. How are Uthopia and Parzival going to perform in London? The numbers alone are not sufficient to tell us. Are they both on top form? Both of them have produced spectacular scores and both riders are tremendously experienced at this level, but we don’t have many recent results to work from. It is still sport and it is going to be exciting down to the last ride! 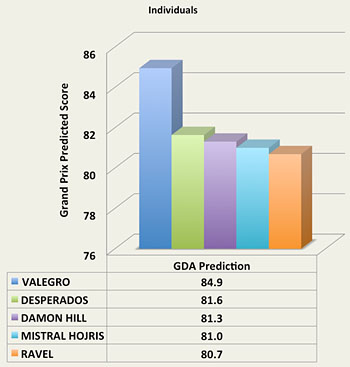 What about the Individual medals? It is hard to predict from only the Freestyle scores - some of the top couples have not performed many Freestyles in top competitions recently - we prefer to base the Individual medal prediction on the GP and OGPS scores and let the Artistic scores play out as they will.

Valegro has to be a clear favorite with a GDA predicted GP score of almost 85%, and a Hartpury Freestyle that captured the hearts of judges and public alike. But thereafter the ranking gets very difficult, Desperados, Damon Hill, Mistral Hojris and Ravel have predicted GP scores between 80.7 and 81.6 - less than 1% of difference overall, it is absolutely too close to call, 2-3 points up or down over the whole test will be crucial for each of these couples - and then there are still the Artistic notes that are more tricky to predict. (And again, there are Parzival and Uthopia either of which could produce a spectacular Freestyle, as well as Augustin, Donnperignon, Dablino, Salinero... close behind)

GDA has put its predictions on the line, and after the Team event we will publish the key to unlock them... We have studied the numbers in all their details, but still we will be there to watch every test and see how the beauty and the sport plays out in London. The overall level is amazingly high, more than 40/50 riders are predicted to score above 70%, lets all look forward to some wonderful dressage in just two weeks time.

- by David Stickland for Eurodressage.com

Related Links
Eurodressage On the Scene at the 2012 Olympic Games
David Stickland: Dressage Analytics for an Olympic Year