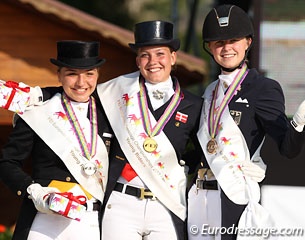 The level of riding in today's Young Riders individual test was phenomenal and took on Aachen proportions. So many riders delivered the goods and rode flawless tests in which not only the quality of their training, but also the core quality of their horses became the determining factor. As none of the top riders made major mistakes, it all came down to which horse was in the best frame and had the highest quality basic gaits. Today judges Svalling (SWE), Schule (GER), Burchler-Keller (SUI), Leyman (BEL), and Hamoen (NED) saw Dufour as ruler of the roost. 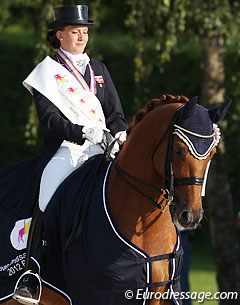 Dufour and Cassidy (by Caprimond x Donnerhall) executed a safe, clean test with many highlights: the good bending on the voltes, the huge extended walk, the overall harmony in their presentation. The tempi changes could have had more ground cover but the pirouettes were better than on Thursday. The major issue in her wonderful ride was the too slow tempo. Also in the team test Dufour rode in third instead of fifth gear and today she seemed to slow down even more. With a bit more forwardness and pezzaz, the Danish star rider would easily have cracked the 80% barrier! 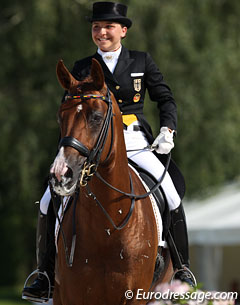 As last starter of the day, German Charlott Maria Schurmann had this advantage working in her benefit. The sympathetic, experienced German team rider presented a more eager Burlington (by Breitling x Rohdiamant). This revealed itself in the swinging half passes, trot extensions and superb extended walk. The freshness and expression had increased in this test but minor impulsion issues still disrupted the image of total harmony. The chunky chestnut lost his tempo before the pirouette right, but Schurmann made a good save. The left pirouette was a bit quick but the horse had good sit. The exit from the rein back was hesitant. The horse tilted his head in the shoulder-in right. The tempi changes were nice.

Schurmann scored 77.026 % to finish in silver medal position. She placed first with the judge at C (79.210%) and eight with the judge at E (72.500%). The brio and energy which Schurmann had, lacked a bit in Sanneke Rothenberger's test but the two could easily have swapped places on the podium. 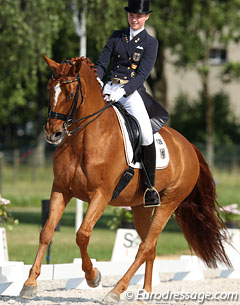 Sanneke Rothenberger and her 13-year old Hanoverian mare Wolke Sieben (by Wolkenstein II x Hitchcock) were velvety sweat. Prim and proper, Sanneke maneuvered her horse through the test as if it were a piece of cake. Always maintaining a steady contact with the bit, Sanneke rode wonderful extensions, good half passes and clear differences between the medium and extended trot. Wolke Sieben should have been quicker in the collected walk as well as had more push and activity from behind  in the canter pirouettes. The pirouette left was a bit quick and flat compared to the right one. The tempi changes were through the body but can cover even more ground. Rothenberger received 76.868% from the panel of judges, which was quite unanimous in their marks for the Bad Homburg based rider. Her horse danced through the ring and was appealing in the presentation of each movement, but some smaller imperfections kept them from the podium. The half passes in trot and canter could improve in cross-over, the rein back happened 2 meters after C and the horse dragged its legs. The pirouettes were lovely, even though Don Windsor dropped a bit behind the vertical. The tempi changes were a highlight of the test!

Danish Nanna Skodborg Merrald and her 11-year old Danish bred Millibar (by Milan x Liberty Dane) slotted in fifth with 74.342, with scores ranging from 71.974 to 78.158%! The refined bay gelding has incredible swing and rhythm in trot and executes big extensions, but in canter he loses some elasticity and relaxation in the back. The tempi changes are still ver ground covering but the clear 3-beat rhythm gets a bit compromised in canter. Nevertheless, Merrald and Millibar rode the best pirouettes of the day!