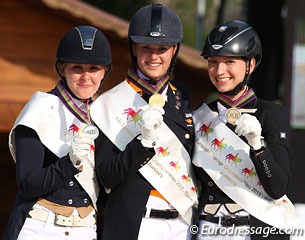 Dutch Dana van Lierop achieved back to back gold by winning the individual test at the 2012 European Junior Riders Championships in Berne, Switzerland, on Saturday morning 14 July 2012. One year after she became European Pony Kur Champion, Van Lierop proved she has made a seamless transition to the junior division by adding another gold medal to her tally.

Blessed with gorgeous 21° C weather despite a few threathening rain clouds early in the morning, the junior riders' individual test featured a high quality field with no less than 11 riders scoring 70% and above. As winner of the team championship test,  Van Lierop was the hot favourite for gold in the individual title. Placing first with all five judges, Van Lierop left no doubt about it that she is on best form aboard her 11-year old Dutch warmblood gelding DJ Tiesto (by Rohdiamant x Nocturn). The panel of judges included Truppa (ITA), Fouarge (GER), Wessels (GBR), Matthiesen (DEN) and Lang (AUT). 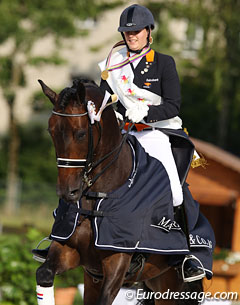 Van Lierop and DJ Tiesto impressed with their accuracy, relaxation and incredible self carriage. The trot work was rhythmically off the ground. The horse stretched well into the contact when given the reins. The extended walk was huge but could have been slightly quicker. In canter the horse has incredible uphill flying changes but one of them had an issue.  DJ Tiesto tossed his head up after the strike off to canter but Van Lierop immediately had him back under control. The distinction between medium and extended canter was not visible enough as the horse lengthened the frame and strides to full extent each time. The canter half passes were wonderful.  DJ Tiesto appears totally confirmed in all the junior riders' movements and is expressive and cadenced in every single one of them. 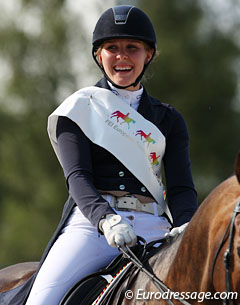 German Vivien Niemann and her Hanoverian gelding Cipollini (by Compliment x Western Star) finished in silver medal position. The combination stood out with its gorgeous trot half passes, lovely stretching into the contact with given reins, and wonderfully rhytmical shoulders-in. The bay gelding has a lovely frontleg usage which makes the trot work highly appealing.

In the collected walk Cipollini could have been a bit fresher but he stayed clear in the rhythm. The extended walk was good with two hooves overstep. The walk pirouette left was a highlight. Unfortunately in canter two small issues arose. The horse jogged in the simple change and the third flying change was not ideal. Niemann scored 74.711% with 72.632% as low score (Matthiesen) and 76.448 as high score (Fouarge). 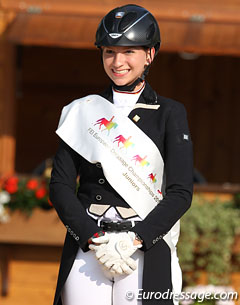 The bronze medal went to German Vivian Scheve on the 7-year old Westfalian bred Bellheim (by Belissimo M x Warkant). The horse showed lots of swing and suspension in trot and moved very elegantly, even though he could have shown more bending in the corners. The left turn on the haunches was a bit big, the right one was small but could have been a bit more electric. The extended walk was lovely. In canter, Bellheim was solid in all the movements. He doesn't have the biggest, powerfully engaged flying changes but they are correct. The third change was a bit flat though, but the well ridden canter half passes and lengthenings made up for that. Trained by Hermann Gossmeier, Scheve scored 74.184% and the five judges were quite in unison with that overall mark.

"At the beginning of the year we never expected such results," said German team trainer Hans Heinrich Meyer zu Strohen, pointing at the increasing form and scores of the German juniors throughout the 2012 show season. "It shows that with good training quick changes are possible." 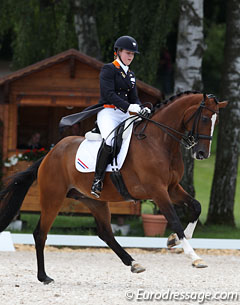 2010 European pony kur champion Antoinette te Riele finished fourth on the 8-year old Dutch mare Ziggy (by Riverman x Flemmingh). The Weert based rider rode a sweet test with full focus. The trot lengthenings were big and could have had more differentiation between medium and extended. The half pass left was gorgeous. The mare lost her balance a bit in the collection from the trot extension and in the collected walk she was short-long in front, taking shorter steps with the left front leg than right. The extended walk was good. The canter work was very secure even though Ziggy could sometimes have the nose more out. The combination scored 73.553%.

Dutch Suzanne van de Ven completed the top five on Stephanie Peters' 17-year old Rhinelander mare Donna Gracia (by Donnerschlag). The liver chestnut mare is not the most supple horse of the pack, but she is an expressive and correct mover and incredibly established in all the exercises. The cross over in the trot half passes was excellent and there was good flow in the entire trot tour. The extended walk could have had more overstep and was a bit quick at the beginning of the diagonal. All flying changes were forwards and engaged from behind. Van de Ven posted a score of 73.211%.