All Combinations Move on to Last 2012 Dutch WCYH Selection Trial 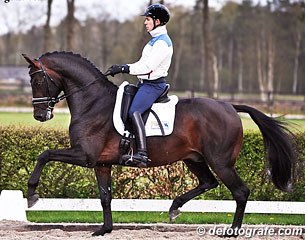 All horses which were invited to participate in the fifth Dutch training and selection trial for representation at the 2012 World Young Horse Championships, will move on to the sixth and last trial on 10 July 2012.

The fifth observation trial took place on at the KNHS head quarters in Ermelo, The Netherlands, on Tuesday 26 June. All combinations had to ride the young horse dressage test and were then briefly training by selector Johan Hamminga.

At the end of the last selection trial on 10 July the six Dutch 5- and 6-year olds, that are going to compete in Verden, will be announced.

Hans Peter Minderhoud and Edward Gal's assistant trainer Marieke van der Putter has taken over the ride on Hans Peter's two youngsters Vitalis and Bosten STH, as Minderhoud will be travelling to the Olympic Games in London to help his partner Gal on the Dutch Olympic team.

Still in the running are: