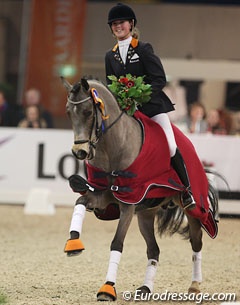 Holland's number one FEI dressage pony Champ of Class has been sold to the Dutch FEI pony rider Lisanne Zoutendijk. The 8-year old buckskin gelding will move to his new owner after the 2012 European Pony Championships.

Champ of Class has proven to be unbeatable in The Netherlands this season at every single national pony competition in the KNHS FEI Pony Cup circuit including the Finals. Also internationally the buckskin has been amongst the top ranked ponies with his rider of three years Sanne Vos, who turns junior rider in 2013.

Champ of Class (by Champion de Luxe x Dornik B) was acquired by Tim Coomans and Coby van Baalen at the Westfalian Elite Auction in Munster for 11,000 euro. Van Baalen matched the pony to Sanne Vos at the time and now at her other student Lisanne Zoutendijk, who already owns two FEI ponies (Amaretto, Oosteinds Rocco).