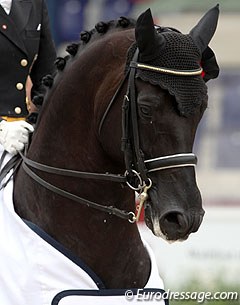 The Hanoverian Grand Prix stallion Desperados (by De Niro x Wolkenstein II) has been honoured with the annual Grande Prize by the Hanoverian Society at 126th Elite Auction in Verden on 14-15 April 2012.

The successful dressage stallion was bred by Herbert Schütt from Hemmoor. Sprehe Stud purchased the black youngster at the stallion sales and he now counts amongst the best young German dressage horses under Kristina Sprehe. Desperados will participate at future shows with the suffix "FRH", the abbreviation for the Hanoverian Supporters Club.

Desperados left the Stallion Licensing in Verden without being approved for breeding, but he was nevertheless sold for the top price of 104,000 euro. In 2004 he matured and developed under the rider and the impressive Desperados was not only licensed, but also honoured as Premium stallion. From that point on his career was simply exemplary. He won the bronze medal at the Bundeschampionate for riding horses at the age of three and four. Trained by Falk Rosenbauer, Desperados achieved his first international placements at the age of only seven. In 2011, Kristina Sprehe took over the ride. The privately owned stallion has been successful in dressage tests at international Grand Prix-level, and in 2011, he was honoured with the Otto-Lörke-Prize for the best German Grand Prix prospect.

Desperados' breeding balance is impressive. Desperados presented the winning mares at the Herwart von der Decken-Show two times in a row: Doris Day and Delany in 2010 and 2011. Doris Day even topped the success of her sire at the Bundeschampionate when she won the title in 2010. A dressage breeding index of 130 points underlines his breeding qualities. Five of his sons are already licensed for Hanover, among them the Premium stallions Destano and Divine Etincelle. Desperados is on his way to the top in breeding and sports.

Since 2009, the Grande-Prize has been awarded to Hanoverian stallions between the ages of ten to twelve, when first reliable information about their hereditary qualities are available as the eldest offspring of a stallion can then be judged under saddle. The breeder of the stallion is honoured with this prize, named after foundation stallion Grande.