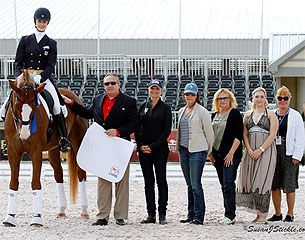 True to its name the Global Dressage Festival is bringing together the best elements of dressage from all over the world. The international influence is apparent not only in terms of riders but in terms of horses. A Spanish flare is taking center ring with the P.R.E. breed.

As a sponsor of the Global Dressage Festival the USPRE is showcasing this pure Spanish breed which is elegantly entering the spotlight and winning top dressage honors.

The Vice President of the USPRE Alexander Zilo comments, "The fundamental mission of USPRE is to celebrate and promote the versatility of the Pure Spanish Horse (P.R.E.). the Horse of Kings, in every equestrian sport sector and to maintain its heritage with Spain.  Known for its intelligence, proud bearing, docile temperament and breathtaking beauty, the P.R.E. horse is well suited for every level of riding. USPRE has chosen to be a founding sponsor of Global Dressage as it is destined to be the world's leading marketing and promotion vehicle in Dressage."

The breed dates back to the 15th century as a prized Spanish war horse.  Its striking beauty has made it Hollywood's choice to star in its screen epics. As a sport horse, the P.R.E.'s strength and elegance combined with its intelligence and sensitivity has suited it to be a top dressage horse.

Now with over a thousand U.S. breeders of the P.R.E. breed, its popularity is increasing. The USPRE noted with its 2012 Dressage Scholarships which benefit amateurs, juniors, and professionals, that 75% of applicants were professional dressage riders. This shows an increase in interest in the P.R.E. breed by professional riders competing at the FEI level.

The USPRE is the official studbook representative in the United States for this growing pure Spanish breed and will be showcasing many up and coming young horses at the Global Dressage Festival.