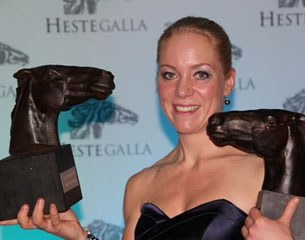 Siril Helljesen and her Grand Prix mare Dorina has been named Norwegian Equestrian Athlete and Sport Horse of the Year 2011 at the Norwegian Horse Gala Ball held at the Oslo Plaza in Oslo, Norway, yesterday evening 21 January 2012. Eighteen awards in total are handed out at this Gala evening.

Three horses were nominated in the Sport Horse of the Year category: show jumper Blue Loyd, the icelander Kolgrimur fra Slätterne, and dressage mare Dorina. The rising 10-year old Dorina is Danish warmblood registered, bred by Eigil Bugge Skjødt from Randers (DK) and sired by Don Schufro out of a Ragtime dam.

Helljesen and Dorina were the shooting stars on the international dressage scene in 2011. They finished 13th in the Grand Prix at the 2011 European Championships in Rotterdam and had top placings at the CDI Hickstead, CDI Oslo, CDI-W Odense and CDI-W Stockholm. On Saturday The pair finished sixth in the Grand Prix Kur to Music at the World Cup Qualifier in Amsterdam, scoring 76.350%

Siril Helljesen flew straight back to Norway from Amsterdam to attend the Gala Ball, where she received the Sport Horse of the Year Award as well as the Rider of the Year award.