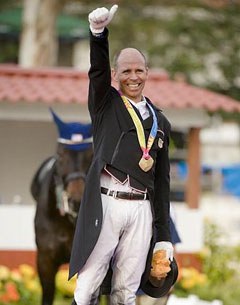 To cap off a record-setting year, dressage superstar Steffen Peters added one more record to his résumé on Saturday night at the United States Equestrian Federation’s Pegasus Awards dinner. He became the first person to score the USEF’s Equestrian of the Year title three times.

Peters (San Diego, CA) won the top honor in 2008 and 2009 based largely on his accomplishments with Akiko Yamazaki’s phenom Ravel – but in 2011, Ravel had some help. Peters capitalized on his first trip to the Pan American Games and scored Team and Individual Gold in a tremendous effort with Jen and Bruce Hlavacek’s Weltino’s Magic. From California to Aachen, Germany Peters was undefeated in 2011 with the now 9-year-old Westphalian gelding.

Both Ravel and ‘Magic’ scored at the 2011 Collecting Gaits Farm/USEF National Dressage Championships in Gladstone, NJ in September sweeping the Grand Prix and Intermediaire I divisions respectively. Peters won all six classes in the effort and secured his Pan Am spot with Magic in the process.

The trip to Mexico proved worth the miles as Peters and Magic dominated at the Guadalajara Country Club. The competition was hard fought for Individual honors but Peters led an American sweep. Heather Blitz and Paragon won Silver while Marisa Festerling and Big Tyme secured Bronze. Peters also won the William C. Steinkraus Trophy , awarded to an equestrian in an Olympic discipline, for the third time. As a result, he was one of six equestrians in the running for the USEF’s top honor.