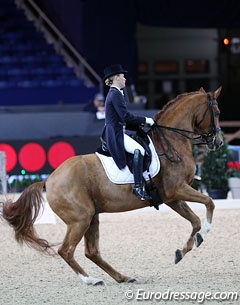 Researchers Mills, Whitaker, Kane, and Murray of Writtle College, Duchy College, and the Animal Health Trust in Newmarket did a comparative study of pirouettes practised in the warm-up and subsequent performance in an elite (Grand Prix) level dressage competition.

The necessity of the warm-up (WU) to physically and mentally prepare the athlete for competition is universally accepted. It is acknowledged that this preparation decreases injury risk and increases performance. Typically a WU consists of passive and general phases followed by a specific phase during which the athlete rehearses skills to be performed in competition. Specific components in the WU usually culminate in a number of efforts which are equal to the expected competition intensity. However, the precise protocol required in the WU leading to optimum performance is not established for the equine athlete.

The aim of this study was to determine the relationship between the frequency of pirouettes practised in the WU and performance in subsequent competition. The total WU of competitors (n=15) undertaking a set dressage test (FEI Grand Prix B 2003) was observed. Analysis of the frequency of pirouettes in the WU was conducted using SportsCode GameBreaker (Sportstec, Australia).

An ANOVA was performed to test for differences between judges mark and frequency of pirouettes in the WU; a correlation was applied to test for a relationship between combined movement mark in competition and frequency in WU. Mistakes were also recorded.

The structure and performance of components within the WU was at the discretion of the rider and was therefore not standardised; horse and rider combinations had previous experience in competition at the level.

However, there was an interesting pattern in the frequency grouping; combinations riding 0 (n=4) pirouettes in the WU achieved an average score of 6.6; those riding 1 (n=1) achieved 6.2; those riding 2+ (n=10) achieved 6.7.

It would be valuable to review these variables again using a larger number of horse and rider combinations. An assessment of the additional components within the WU is required to establish whether the specific phase of the WU has an influence on competition performance.

A comprehensive understanding of the WU may assist the rider and trainer in preparing the horse to optimum performance prior to competition. This would have implications for performance as well as prevent over-exertion and strain on the horse in the warm-up phase of competition.