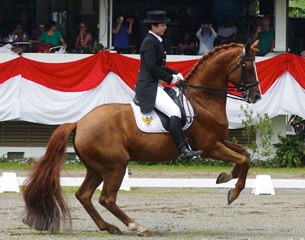 The Indonesian dressage team and Indonesian rider  Larasati Gading were the gold medallists at the 2011 South East Asian Games held at Rafiq Radinal's beautiful Arthayasa Stables in Jakarta, Indonesia, on 16 - 20 November 2011.  The 26th South East Asian Games included three equestrian disciplines -- dressage, eventing and jumping -- amongst many other sports held in the area.

These FEI approved Regional Championships are held at Prix St. Georges level and host nation Indonesia won their first gold medal since the first time they participated in the equestrian SEA Games in Singapore 28 years ago.

The Indonesian team took highest honour ahead of silver medal winning Thailand and bronze medallist Myanmar, whose ridiers competed on borrowed horses generously supplied by Indonesia. The Indonesian team won gold  with a total score of 205.947 points, while Thailand earned silver with 195.758 points, followed by Myanmar with 164.621 points.

"This is the first Games gold medal in an equestrian event ever for the country," said Irvan Gading, president of the Indonesia Equestrian Federation. 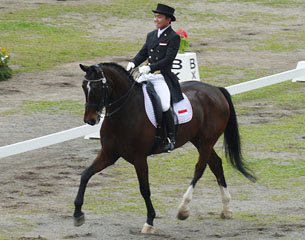 The individual medals were based on the combined scores in the Prix St. Georges and Prix St Georges Freestyle. Indonesian rider Larasati Gading and her 13-year old Hanoverian stallion Wallenstein (by Wolkentanz I x Wildfang) scored and average of 70.981% in those two rounds.

The 40-year old Larasati Iris Rischka Gading prepared for the 2011 SEA Games by competing in Germany until September. Her chestnut stallion Wallenstein was actually a replacement for her first horse which became injured, but it all turned out well. 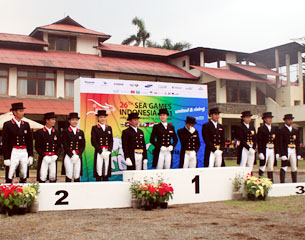 The Ground Jury consisted of Mary Seefried (AUS), Angelika Fromming (GER), Helen Hughes-Keen (NZL), and Yuri Rumanov (RUS). President Mary Seefried commented that “the standard was high and exceeded the expectations of the judges. The top three riders in the teams and individual competitor rode with a lot of expression and understanding of the level of collection and suppleness required at this level. The winning horse Wallenstein scored 8s and 9 s with very expressive ground covering trot extensions.”

Following the Games some of the participating horses will return with their riders to compete in Europe after a significant period of up to 3 months in quarantine prior to re-entry into Europe.