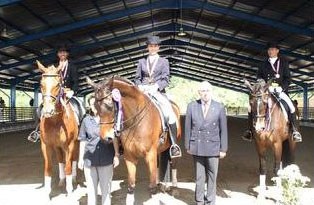 The main sponsor of the event was Eiger.

Ronny Lukito started Bandung Equestrian Center (BEC) in 1999 in Villa Triniti in Bandung. His daughter’s hobby soon became a foundation for a lifelong love for horses and established a noble vision and mission.

BEC aims at preparing riders to become professional athletes at top national and international level in order to support and further develop equestrian sport in Indonesia. The inclusion of a special training programme for potential junior athletes demonstrates how seriously Ronny takes his task. What started with one horse for his daughter Jeanne, soon ended up in an amount too big for his stable.

On the occasion of the FEI World Dressage Challenge, Ronny proudly presented his new premises Kumala BEC located at Cijanggel. This equestrian training center includes a 30 x 72 m indoor arena, a 20 x 40 outdoor arena, 40 permanent stables and is located in the cool mountain area in the north of Bandung. Its surroundings fully support the level of concentration needed for horses and athletes to develop higher standards. Cooperation with Kumala Stable from East Kalimantan has been established to further support equestrian sport in Indonesia.

At first, visiting horses were curious after their arrival at Kumala BEC, but it didn’t take them very long to adjust. Many athletes declared that their horses were happy in Cijanggel. Although some athletes had trouble to become accustomed to the cool weather, they all seemed to enjoy the serenity of the environment too, and used it for supporting their level of concentration and performance during the preparation and competition. The results of the FEI World Dressage Challenge were high and the international judges were impressed by the skills of the riders in Indonesia.

Best Horse in the Trot up – Macece accompanied by Jamhur Hatta showed all professional riders that both horse and rider need to train in order to prepared themselves for the trop up, as underlined by the international judges Mr. Jacques van Daele and Ms. Minako Furuoka during the technical briefing.

Children's World Challenge Test – The 12 years old Reshi Radinal stunned the audience with a lovely test on Rainer with 68.40 %! 2nd came Alvaro Menayang on Espresso with 62.80 %, followed by Karina Schultz on Pegasus with 60.60 % and Alyssa Prameswari on Raffles with 59.80 %.

Reshi was first announced as being the winner of the overall Children’s test in group VIII, but turned out to end on the second place after Alice Cooney (SIN) on Gidra with 68.60 %, with just 0.20 % difference. Alvaro, competing in this class for the last time was able to end at the 8th place in group VIII.

Endarjanto Bambang and Rahmat Natsir turned out to have the two highest scores for group VIII and Larasati placed 4th after Christina Kunz (SWE) on Genial II with 62.57 %, showing South East Asia that Indonesia is taking the dressage challenge very serious.

Novice Level – Jojo Jonathan on Zhanya with 60.93%, 2nd Dikie Mardiyanto on Caliber with 60.56%, 3rd Tiffany Fairfield on Imon with 60.00% and 4th Ferry Wahyu Hadianto on Black Eagle with 57.78%. Riders and horses of the Novice level in Indonesia were not able to get close to the scores of the rest of group VIII, putting Jojo, Dikie, Tiffany and Ferry on the 16th, 18th, 20th and 29th place of the total group results. Kumala BEC rider Jojo Jonathan on Zhanya.