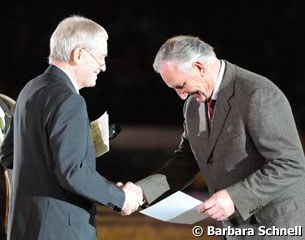 German trainer and Olympian Klaus Balkenhol has been proclaimed "Riding Master" at the 2011 CDI Stuttgart in Germany last weekend. The 71-year old received the title for his achievements for German dressage throughout the years.

Balkenhol won Olympic team gold in 1992 and 1996 and individual bronze with Goldstern at the 1992 Olympics in Barcelona. Between 1996 and 2000 he was German team trainer. These major accomplishments made him earn the Riding Master (Reitmeister) title.

"I won't rest on my laurels. I'm still young enough to devote myself to classical riding and the riding culture," Balkenhol commented.

"It's finally there and it was long due," said daughter Anabel Balkenhol. "He definitely deserved it," his proud daughter added.