Franziskus Back Home in Lingen 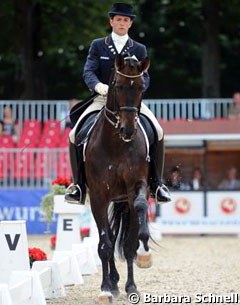 After the sale of Donnperignon to Denmark, Christoph Koschel has now lost the ride on his second Grand Prix horse Franziskus. Owner Heinrich Kampmann brought the bay Westfalian back home to Lingen.

Four weeks ago Kampmann picked up his 13-year old Westfalian by Fidermark at Koschel's Hof Beckerode. "I wanted to give him a time-out," Kampmann told ST. Georg, adding that the owner started to ride the horse himself. "He's doing well," he said.

It is unsure whether the horse will return to Koschel, who now only has the upcoming Grand Prix horse Rostropowitsch to rely on. "I haven't thought about it. Let's see. Maybe I'll continue to ride him myself," Kampmann concluded.

Franziskus has already been ridden by a series of professional Grand Prix riders. He started with Rudolf Zeilinger, then moved to Hubertus Schmidt, and finally ended up at Koschel's.