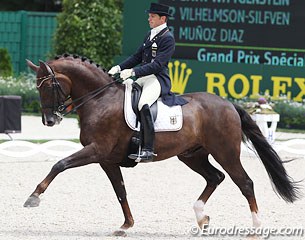 German WEG team bronze and European silver medal winning Grand Prix horse Donnperignon has been sold to the Danish Under 25 rider Anna Kasprzak. Christoph Koschel decided to sell his number one FEI horse to secure the financial future of his family.

Donnperignon is a 12-year old Finnish warmblood by Donnerhall out of a Mozart dam. The athletic liver chestnut gelding became the key horse in Koschel's career launching him as one of the world's dressage elite riders. Besides two team medals, Donnperignon also enable the 35-year old Christoph to became German reserve kur champion in 2011.

"I have had Pepe since he was four. With the support of my father I have trained him from a wild youngster to an absolute top horse," said Christoph. "Donnperignon is a unique character. He is trustworthy and totally attached to humans. He has major willingness to perform and is so much fun to train. This is a mix, which makes him a very special horse in my eyes."

Hanni Toosbuy Kasprzak, ceo of the Danish multinational ECCO, made an offer the Koschels couldn't refuse. Pepe will be a potential Danish Olympic horse for her former young rider daughter Anna. 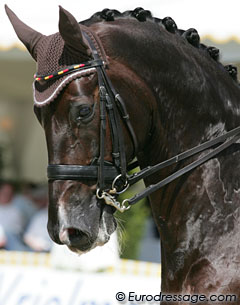 "As a young family father I also have to keep my private future in mind," Christoph explained. "We have a training and dealing yard and no big sponsor to back us up. It's not possible not to consider the financial risks to keep such a special horse as Donnperignon. That is why we decided to take the difficult step of selling."

Koschel brought Donnperignon to Denmark himself, where Kasprzak has a private dressage barn in Haderslev. Christoph will be helping Anna to ride the gelding the first few days.

Koschel will continue his own dressage career with the rising Grand Prix stars Rostropowitsch (by Rockwell) and Franziskus.