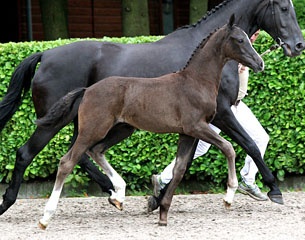 Buyers had to dig deep into their pockets for a foal at the 2011 Elite Foal Auction in Borculo, The Netherlands, on Thursday 25 August 2011. Gambo (by Charmeur x Kennedy) was sold for 74,000 euro to Blue Hors Stud in Denmark.

The black colt by Charmeur (Florencio x Jazz) is a half brother to KWPN licensing champion Diebrecht, which sold to Blue Hors in February 2011 and got renamed Denzel. Esben Moller of Blue Hors had to bid against the Dutch duo Joop van Uytert and Ad Valk.

The most expensive filly was the second most expensive foal of the auction. The black filly Gaby (by Jazz x Furst Heinrich x Rosenkavalier) sold for 60,000 euro to a syndicate which includes Willem Jan Schotte, Rob van Puijenbroek, Tim Coomans and Louis Röst.

The best selling show jumper was Grand Power W (by A Lee Spring Power x Renville) which sold for 35,000 euro.

Seventy-seven dressage and show jumping bred foals were offered for sale and they sold for a staggering average price of 12,500 euro. The cheapest foal was 4,000 euro. Twenty-three foals sold for more than 10,000 euro.

Offer your foals for sale in Eurodressage Foal Market!!