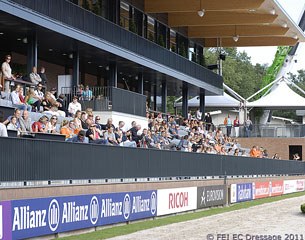 The Rotterdam grandstand, newly built for the 2011 European Dressage Championships, caught fire during the 2011 CHIO Rotterdam national equestrian competition in the late afternoon of 24 August 2011.

The fire was limited to the roof of the building and there was some smoke. According to the fire department the fire was caused by a short circuit.

Nobody got injured and the building was evacuated quietly. The fire brigade was on the scene quickly and extinguished it within minutes.

The fire has no consequences for the CHIO Rotterdam which will continue tomorrow until Sunday 28 August 2011.