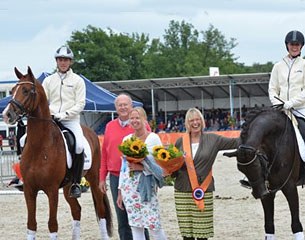 The Jansen family has been proclaimed KWPN Breeders of the Year 2011 at the 2011 KWPN Paardendagen in Ermelo, The Netherlands, on Friday 12 August 2011. Grietje and Hans Jansen from Joppe, The Netherlands, were honoured in a special ceremony.

The Jansen couple was celebrated for their outstanding dressage horse breeding. Successful offspring coming from their stable include Wynton, Bretton Woods, Chagall D&R and Davigna.

The licensed stallion Wynton was the performance test winner in 2007 and reserve champion in the Pavo Cup. He competed at the World Young Horse Championships and is now schooling fourth level. His daughter Davigna finished 11th in the champion's ring at the 2011 KWPN Mare Championship on the same day as the Jansens were proclaimed Breeders of the Year.