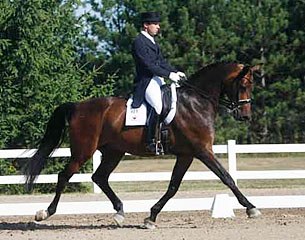 James (Jaimey) Irwin of Stouffville, ON swept the Advanced Division at the Cornerstone Farms Summer Festival, July 15-17, 2011, held at the Caledon Equestrian Park.  Riding Winston, Mary Ellen Horgan’s 14-year-old Dutch Warmblood gelding by Whinny Jackson, Irwin earned scores of 70.684% in the Prix St. Georges, 70.132% in the Intermediaire 1, and 73.875% in the Intermediaire 1 Freestyle.

Both Jaimey and his wife Tina have been campaigning Winston this season, and both have qualified to compete at the Pan American Games team trials in August. As of July 23, Jaimey led the qualification race with a combined average of 70.412%. Under Tina, Winston was the Alpha Omega Horse of the Month for June 2011, and Tina herself was declared the Red Scarf Athlete of the Month for June. She currently sits in fourth place in the qualification standings, an impressive feat given that she just began showing in May, having given birth to their first child in February.  When asked who would be competing at the team trials, Jaimey replied:

"I think the situation that we have is a very unique one.  I don't believe that it has ever happened before that a husband and wife … have both qualified on the same horse for a major team event.  Winston is an exceptionally consistent horse … exactly what a team horse should be.  I feel very fortunate to be able to ride such a horse and could not have had the success without the amazing support of Mary Ellen and Michael Horgan who own Winston.  I know that everyone wants to know who will be riding Winston at the trials and that will be Tina.  That was the deal since Tina had a baby and was riding Winston before, she would get the ride if she could.  I had trained Winston all winter to get him to the point where he would be strong, fit and very consistent to be a top contender for the Pan Am Games."

In the Grand Prix division, 2007 Pan American Games team silver medalist Diane Creech of Caistor Centre, On, won the Grand Prix and Grand Prix Special classes with Devon L.  The 11-year-old Hanoverian gelding (by DeNiro) is owned by Creech’s long-time sponsor Douglas Leatherdale. This is the gelding’s second year at Grand Prix, and he is very comfortable now at dressage’s highest level.  The pair was also victorious at the two Milton CDIs in June.

“We are very excited having several international judges agreeing on the quality in Devon L's Grand Prix Work. He is showing with more maturity and consistency. We do love to see how pleased he is with himself and happy,” said Creech.

Also coming off her success at the Milton CDIs was Olympian Jacqueline Brooks of Cedar Valley, ON. She and Gran Gesto, the 16-year-old Oldenburg gelding owned by Brinc Ltd and Anne Welch, won the Grand Prix Freestyle with a very solid score of 70.950%. Not one of the five judges scored the duo below 70 percent, a testimony to the combination’s experience and crowd-pleasing performance.

The FEI Young Horse division was also part of the CDI3*. Olympic Bronze Medalist Gina Smith of Brockville, ON, rode Royal Flush, a Hanoverian gelding by Royal Prince, owned by The Firelight Group, to scores of 71.600% (Preliminary) and 76.00% (Final) in the Six-Year-Old classes. Smith’s student, Kelsey Dickson of Brockville, ON, won both Five-Year-Old tests with Danbury, a Hanoverian gelding by DeNiro that is also owned by the Firelight Group. They scored 73.600% in the Preliminary and 78.000% in the Final.

Competition organizers Barbara Mitchell and John Taylor of Cornerstone Farms, an Orangeville-based hunter-jumper facility, have been running dressage competitions for 19 years, the last 16 at the Caledon Equestrian Park, site of the equestrian venue for the 2015 Pan American Games.  In order to meet the needs of riders qualifying for this year’s Pan American Games, and next year’s London Olympics, a total of nine FEI judges officiated at the competition.  The presence of an FEI 5* judge (Linda Zang) also enabled Grand Prix riders to obtain a certificate of capability for the 2012 Olympics.  The competition was held in conjunction with an Equine Canada Gold Competition, and had a total of 217 entries, 39 entries in the CDI, and eight foreign riders. Six of the seven available rings were used for this competition, and despite the scorching heat, only two entries scratched. Mitchell and Taylor were not upset with the heat, however, given that their June show was very wet. “No complaints from us, at least the sun was shining,” said Mitchell.

The next Cornerstone dressage competition will feature the second leg of the Pan American team dressage trials, August 19-21 at the CEP.  The first will be held at the Orangeville Show Grounds, August 5 – 7, and is being hosted by the Caledon Dressage Association.