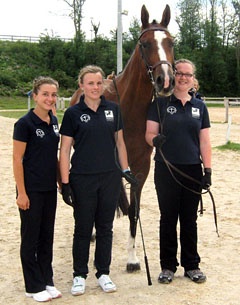 in breeding theory, conformation judging, the assessment of paces at liberty and loose jumping and handling on the triangle each other.

These championships – divided into junior (16-19 years) and senior (20 – 25 years) sections and now known as the International Breeders Championships – were officially designated as World Breeding Federation Championships for Young Breeders in 2009 so the winners can justifiably regard themselves as the World Champions. They are held every two years and this year they took place in Lyon, France, where the overall winners were the Holsteiner Verband, with the runner up being Baden Württemberg (who also won the junior section) and the senior team winners the representatives of the Sachsen Thüringen studbook.

This year also saw the appearance of the first ever teams of young breeders representing UK studbooks and under the aegis of the British Young Breeders programme and sponsored by The Stallion Company and Unipart Leisure, they had impressive results. Sammy Render of the Anglo European Studbook senior team was 10th individual overall in the hotly contested senior section competing against more than 60 representatives of major European studbooks that have been training for and taking part in these sorts of competitions for over 20 years. An individual silver medal went to Laura Humphreys of the Warmblood Breeders Studbook UK senior team for the senior conformation judging section and individual bronze to Emma Williams of the British Hannoverian Horse Society senior team in the loose jumping judging section.

Best junior was well-known young dressage rider Samantha Brown of the BHHS junior team, which was also the 2nd highest placed junior team of the large number that were new to the contest. These championships were much larger this time and of the 7 new senior teams contesting the WBSUK came out top, claiming the scalps of such well known major players as the KWPN, Swedish Warmblood, Belgian Warmblood, Trakehner Verband and the Selle Francais. 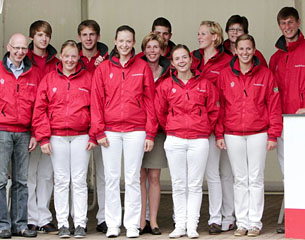 "The journey there was a long one, a round trip of over 1500 miles by coach," commented BYB co-ordinator Celia Clarke "and the UK team members had to spend not only hours at home studying the theory of sport horse breeding but also many days at various studs including Woodlander, Witcham House and Hawtins learning how to both present horses in grading style and judge them and we are all very grateful to Lynne Crowden, Judith Davis, Katy Holder-Vale and Nicole Nelson for preparing them so well. These excellent results make it all worthwhile."

Lynne Crowden of Woodlander Stud, who not only led most of the training but also attended the Championships themselves as team trainer, guide and mentor, said that she was very proud of them all and that they had been a pleasure to work with. She explained that the teams were very much regarded as the new kids on the block by the other studbook teams but "their superb display of team behaviour and wonderful individual highlights have enabled them to perform beyond greatest expectations."

Celia Clarke, who was elected as Secretary of the International Young Breeders organisation at its Council meeting during the championships added that the British Young Breeders programme will continue to co-ordinate the whole project with a view to sending teams again in 2013 when the championships will be held at the Flyinge Stud in Sweden, but in the meantime the actual training will devolve to the separate studbooks using an agreed common syllabus and possibly a UK national Young breeders championship to help assess progress.