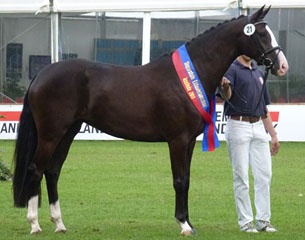 The 3-year old Fire and Ice was named the Oldenburg mare champion of the 2011 Brilliant Ring at the Oldenburg Elite Mare Championship held at the historic Royal Stud of the Graf Anton von Oldenburg in Rastede, Germany on 20 - 24 July 2011.

Fire and Ice was sired by De Niro and is out of St.Pr.St. Free Life (by Lord Liberty x Riesling). She is bred by Dieter Scherwitzki and owned by Rudolf Flass, who purchased her as a Foal at the 2008 Oldenburg foal auction. She earned excellent scores of 8.5 on her canter and 8.0 on her trot in her Mare Performance Test as well as a 9.0 for her walk resulting in an
8.10 overall score.

Contessa D (by Canturo x Corrado I x Landgraf I), who had received an outstanding 9.5 on her free jumping in her earlier Mare Performance Test, was the champion of the show jumping mare.

Out of hundreds of 3 and 4 year old mares that are inspected by the Oldenburg Verband in Germany every year, only a select group are invited to go on to the Mare Performance Test. Out of those mares, around 100 are awarded the States Premium Candidate title, and then out of these States Premium Candidates, approximately 60 are invited to the Mare Show in Rastede. These figures can obviously vary from year to year based on the quality of the mares presented, and this year 55 dressage mares and 17 jumper mares were invited. Once in Rastede, the mares are presented in hand on the triangle to the judging committee. For the jumper mares, the top 6 were invited into the final walk ring, they were ranked, and the champion was named. For the dressage mares, 16 were invited in to what is called the "Brilliant Ring" where each mare is trotted in hand into the main stadium of the grounds, and then they were all asked to walk in a large circle around the judges who then ranked them, and named the champion.

The Evaluation Committee for the dressage mares included the Grand Prix rider and trainer, Wolfram Wittig. He gave the final comments about the champion mare, Fire and Ice: "When you come from the sport world, you develop a critical eye, especially for the walk. We saw some very good horses with a phenomenal champion in all three gaits. She was able to convince everyone with her excellent walk. Fire and Ice has wonderful conformation, is a very nice type, and showed herself off with a lot of presence and charm."